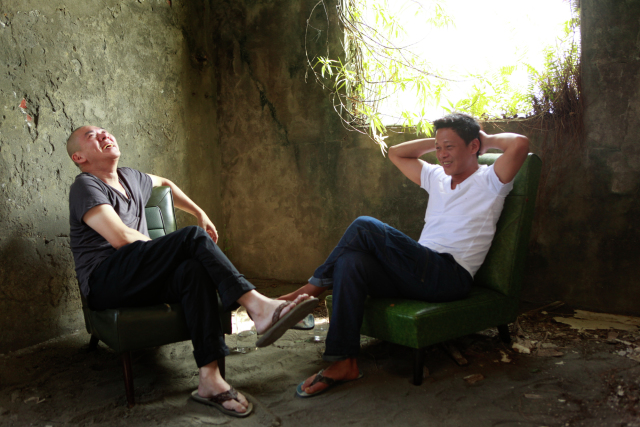 I’ve long heard good things about Jerzy Skolimowski; particularly esteemed are the four features he made in the 1960s, including Le Départ. I’ve seen only Deep End (1970) – which is stunning: enough to warrant a look at his entire filmography – and The Shout (1978; strange, recommended). The little-known but valuable essay collection Second Wave (1970), edited by Ian Cameron, contains an essay on Skolimowski (by Michael Walker) that first sparked my interest in his work.

I felt that his new film, 11 Minutes, deserved better than the cool critical reception it received at the festival. Two strands of cinema meet here. The first is the multi-character “network narrative”: a kind of film that has historically possessed a tendency toward middlebrow preciosity or inflatedness (not just in Iñárritu’s Babel or 21 Grams but also in its prototypes by vastly better filmmakers like Kieslowski [Three Colors: Blue]). The second strand here turns out to be the antidote to the first: the satirical thriller, a form favored by masters such as Hitchcock, De Palma, Chabrol and Verhoeven (I have a special weakness for this kind of cinema). Skolimowski’s sardonic humor is the overlay, the governing sensibility that pulls these two strains together. The ending of Christian Petzold’s Phoenix has been much praised, but 11 Minutes has a finish that is almost as exhilarating and unexpected. Skolimowski has said that he began by dreaming the final image (“frame-by-frame”), then reverse-designed the film from that image. “Is there a stranger, more provocative late-career renaissance in recent memory?” asks Fernando Croce in one of the few sympathetic reviews of the film from the festival.

Here are a couple of interesting things we learn about the director from recent interviews, such as the one he did with Danny Kasman at MUBI Notebook: he’s not a cinephile – and watches less than 10 films a year; he made a self-admittedly “bad movie” (30 Door Key, 1991), then quit cinema to paint for the next 17 years; and he still sees himself first and foremost as a painter.

He draws this contrast between filmmaking and painting:

Painting is zen. Filming is chaos […] I’m a different person when I paint. I’m alone, I listen to music, I have plenty of time, I’m not in a hurry. Every movement is important, sometimes it takes a long time, sometimes it’s spontaneous. In a film, I’m one of those with a huge group of people just behind my back and I feel it …

Since I began attending TIFF in 1999, I’ve been fortunate to see Tsai Ming-liang and Lee Kang-sheng on multiple occasions at Q&As. This period has also coincided with my getting to know and love Tsai’s work. Especially because he likes to return to similar characters, themes, motifs and locales in his films, his audience experiences a growing familiarity with the Tsai universe with each new work. But this has also resulted (at least for me) in a growing curiosity about Tsai’s own, personal universe – something he doesn’t talk too much about in interviews.

Because of this, Afternoon holds immediate interest for Tsai fans – and for few others. It records a conversation between Tsai and Lee, runs 2 hours and 20 minutes, and contains just 4 shots, all from the same camera position. The setting is a dilapidated rooftop room; two big windows behind them contain a gorgeous view of the greenery outside.

We learn lots of personal details about Tsai and Lee’s life. They are close friends who’ve bought a house together in the country (it is also the movie’s setting). Tsai is a constant worrier and a bit of a control freak. He likes to advise, be maternal, micromanage – however benignly or gently. They often share a hotel room (for example, when they travel to film festivals); and an utter everyday familiarity with each other (for example, being unclothed in each other’s presence).

As Ignatiy Vishnevetsky points out, Tsai takes this opportunity to ask Lee questions that he’s been wanting to for a long time, such as: “‘Will you cry when I die?,’ ‘Do you ever hate me?,’ ‘My sexual orientation: Has it ever bothered you?,’ ‘How do you like my cooking?’)”. Tsai discloses that he likes to frequent gay saunas because they “give me a sense of belonging … even if nothing happens inside, my feeling of restlessness subsides.” Lee says that he frequently accompanies Tsai to these saunas and waits outside, ready to call the police if he doesn’t come out after a while.

Their friendship is very touching. Michael Sicinski calls the film “a rare and lovely cinematic expression of gratitude” in which Tsai attempts to thank Lee for everything he has brought to his life and films. Tsai praises Lee’s acting: “You may be the strangest actor ever: no one is sure if you are acting or not acting.” He declares that good acting means “don’t express anything; just deal with the situation.” He confesses the reason why he makes films: “People need something to help them … we need things to help us understand life … it could be scriptures or it could be cinema.”

It is sad to hear that in recent years, Tsai has been ill because of persistent side effects from blood pressure medications. He now seeks natural remedies for his ailments. Even though he appears to be an extraordinarily disciplined and industrious person, he drolly characterizes all his films as “ruins.” He discloses that he has one brother – who doesn’t like his films. He jokes that he received an Oxford University Press book on “slow cinema” in the mail the day before, but can’t read it because of his poor facility with English.

Towards the end of the film they stop talking, and simply share each other’s silent company. But the camera doesn’t stop recording. Taking charge of each situation, as he is apparently impelled to do, Tsai says: “Let’s wait for the light to disappear” – and so we do (along with Lee and the crew behind the camera) …

— Adrian Martin and I have begun rolling out LOLA 6. We now do one issue a year, and the theme of this one is “Distances”. In her latest post, Catherine Grant very generously rounds up the issue — along with new issues of MOVIE, in[Transition], Film-Philosophy, Senses of Cinema, and more.

— David Hudson has a post at Fandor on his “Highlights of 2015”: a huge thank-you to him for his kind words about The New Cinephilia. Also at Fandor: the most anticipated films of 2016.

— I wrote a piece at the Criterion Collection website on Buffalo film culture and recent screenings of the Apu Trilogy here in town.

— A collection of best-films-of-the-year lists at Desistfilm that includes Nicole Brenez, Cristina Álvarez López, Adrian Martin, and many others.

— Catherine Grant’s roundup of “Favourite Film and Media Studies Gifts of 2015 Galore!” Also: a podcast interview with Catherine at The Cinematologists.

— Kristin Thompson and David Bordwell on “the best films of 1925”.

— Katie Kilkenny at The Atlantic: “Why Are So Few Film Critics Female?”

— Leo Goldsmith on Manuel Mozos’ film João Bénard da Costa: Others Will Love the Things I Have Loved. Also: Miguel Gomes on Mozos (“Ghosts and Phantoms”).

— Violet Lucca on black independent film-making in New York over the years.

— “The Male Gaze in Retrospect”: a collection of pieces commemorating the 40th anniversary of Laura Mulvey’s classic essay, at The Chronicle of Higher Education.

— There’s a new issue of the journal Cinema Comparat(ive) Cinema, and it’s devoted to Portuguese cinema.

— I’m looking forward to spending a weekend in Rochester in the spring, attending The Nitrate Picture Show at the George Eastman Museum.