TIFF 2015: Films and their Paratext 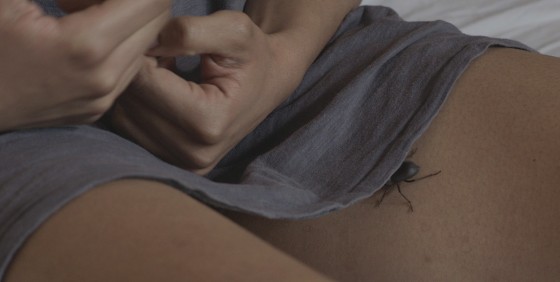 Two films at TIFF, both by filmmakers who exhibit their work in museums and galleries, raised for me some interesting questions about the role that “para-textual knowledge” plays in film criticism. Here, the paratext in question was detailed information about context and intentionality provided by the artists, stated outside of the films themselves. Let me first begin by describing what the films are doing — and then air my questions.

One of my festival favorites, Invention is the first feature by the Canadian artist Mark Lewis; it is a stately and ambitious work designed to function on multiple levels. Some of these levels are easier to intuit and unpack than others. Most overtly, it is an homage to the city symphony films of the 1920s such as Vertov’s Man with a Movie Camera (1929) or Sheeler/Strand’s Manhatta (1921). Lewis spent two years shooting in three cities: Paris, São Paolo and Toronto.

But the similarities to those earlier forebears are ultimately less than they might appear. Beyond the fact that they are all interested in exploration of urban space, the differences outweigh the family resemblances. Invention contains just 14 shots, and throughout its 80-minute running time, the camera is almost always in slow, steady and deliberate motion. This combination of long takes and camera movement has the effect of conferring a truly autonomous curiosity upon the “kino-eye”.

Not all aspects of the city, however, are of equal interest here. City streets, modernist buildings — for example, by Oscar Niemeyer in São Paolo, Mies van der Rohe in Toronto — and art museums become the film’s privileged objects of curiosity. The camera is especially drawn to glass and reflective surfaces, and to spaces in which light and shadow are at play. The film is silent except for the opening, which features solo piano as the camera slowly encircles a sculpture at the Louvre, and the final frames, which are accompanied by explosive rock music. All in all, Invention makes for a spellbinding viewing experience, unspooling a nonstop stream of sensations and a non-narrative suspense.

But once the movie ended, I read the “artist’s statement” in the presskit and learned a great deal about Lewis’s conceptual framework for the film — almost none of which, I should say here, was evident from “simply” watching Invention.

Lewis means for the film to have an entire background narrative: A camera is “born” into a world without cinema, and proceeds to “learn” about this world by moving through the space of cities — through modernity itself. There is a historical backstory to this choice: Lewis believes that 17th century baroque architecture marked the beginnings of the modern, and when people first moved through its architecture (he cites the buildings of Francesco Borromini as an example), they experienced “cinema” for the first time. So, not only was the experience of the modern city that of cinema “avant la lettre,” it also provided new “lessons in perception” for the city’s inhabitants — similar to avant-garde cinema’s capacity to “remake perception” in its viewers. (We might recall Stan Brakhage famously imagining an eye “which does not respond to the name of everything but which must know each object encountered in life through an adventure of perception”.)

Lewis also singles out a specific inspiration for his work:

Jacques Tati’s Playtime is a sublime consideration of the city in relationship to its ideological representations. At the same time, Playtime insists, with great humour and strange precision, that the modern city is simply an invention of the cinema, but also that cinema is only the imagination of that very same city. Tati’s Playtime produces a kind of indeterminate either/or in this regard, refusing to privilege one over the other. This is its brilliance, I believe, and this is why I watch the film over and over again. I, too, cannot decide whether my films, for instance, depict the city or if they are helplessly produced by the city.

The title of Lewis’s film is a nod to Louis Lumière’s well-known line about cinema being “an invention without a future”. Lewis is trying to imagine the inverse: a future without an invention. Or rather, a future where the invention of cinema is just beginning to take place …

Artist Mathieu Kleyebe Abonnenc’s first fiction film, Sector IX B, is 40 minutes long, and begins with an epigraph that is a brief quote from French surrealist Michel Leiris. It proceeds to narrate the journey, in elliptical fashion, of Betty, a scholar who travels to museums in Dakar and Paris to do anthropological work. We occasionally see her ingest pills and have hallucinatory experiences; and we watch her linger over old photographs that might be from a personal album. The film closes with an enigmatic sequence, atmospherically reminiscent of Apichatpong, in which workers come upon what might be some kind of lost or hidden artifact in the basement of a museum. I enjoyed this mysterious, carefully composed, beautifully paced movie while having only the most rudimentary idea (outside of its barebones narrative) of “what it was all about.”

It turned out, when I chatted with the filmmaker backstage after the screening and read his “artist’s statement,” that there is a rich contextual backdrop without which the work is almost impossible to decode. I learned that the protagonist Betty is trying to recreate the state of mind and body of researchers who traveled in the 1930s to Africa as part of the Dakar-Djibouti ethnographic expedition. The primary inspiration here was Leiris, who was part of this expedition, and who wrote an account about it called L’Afrique Fantome (Ghost Diary).

I also learned from my conversation with the director that members of the original expedition took powerful drugs in order to strengthen their defenses against African illnesses (such as those transmitted by tsetse flies), which significantly altered their perceptions, thus further undermining claims of “scientific objectivity”. In the film (I learned later), Betty recreates the medical prescription box given to members of the expedition, and tests the effects of the drugs upon herself. The film’s final scene, in which workers unearth an unknown object in the museum’s basement, was intended by the director to question the status of each artifact in a museum’s collection: which items are chosen to be exhibited — and which are deemed less worthy of display, and why.

Suffice it to say: my experience of these films would have been unimaginably impoverished without my extended encounter with all this artist-provided background – and the resulting knowledge about how these works need to be approached.

The term “paratext” originated in literary theory and interpretation, and refers to the material that surrounds the main text, such as the preface and foreword, and also including such things as formatting, typography, and author portraits. Interviews and commentaries by the author also belong in this category.

The theorist Gérard Genette thinks of paratext as a gray area, not exactly the text but not exactly outside of it either. He calls it “a threshold … a zone between text and off-text”. It is a place, Genette writes, “of an influence on the public … an influence that is at the service of a better reception of the text and a more pertinent reading of it.” Paratext thus becomes “a fringe of the printed text which in reality controls one’s whole reading of the text.”

Artist’s statements are, of course, an important kind of paratext. When I first encountered avant-garde films that came with such “instructions for interpretation,” I remember being a bit skeptical. An artwork, I then believed, must enact its themes and intentions within the work, rather than impose or announce them from outside. But reading Genette made me reconsider this hard distinction between text and not-text. Our interpretations of a work never emerge completely from within a work and its details anyway; we routinely bring outside knowledge to bear upon the work when we interpret it. So, over the years, I’ve come to value statements of the artist’s intentions and commentaries, regarding them as always potentially useful.

I’m curious to know: If we were to think of paratext as a “genre,” are there particularly good examples of them in the history of avant-garde cinema? Also: I tend to think of artist’s statements in the experimental film world as a recent phenomenon — perhaps spurred by artists being forced to “commodify” and “sell” their work in the art marketplace to grants organizations, art galleries, and the like. Have avant-garde filmmakers always accompanied their work with written or spoken aids to interpretation? I suspect there is an interesting history, waiting to be written, of artist’s statements in avant-garde cinema.

— At Sight & Sound, “best films of the year” lists by over 150 critics worldwide.

— At caboose: Catherine Grant’s audiovisual essay “Dissolves of Passion,” which forms an integral part of her contribution to the upcoming caboose volume “The Videographic Essay: Criticism in Sound and Image,” whose primary authors are Christian Keathley and Jason Mittell.

— Cristina Álvarez López and Adrian Martin’s reflection on making audiovisual essays in Frames Cinema Journal begins: “Not only is the work we do para-textual in relation to the usual academic work on film; we ourselves are para-academics …” Also: Three audiovisual essays by Cristina on Luis Buñuel, commissioned by ICA on the occasion of their Buñuel retrospective.

— The new issue of cléo: a journal of film and feminism is on the theme of “grace”.

— A conversation between Jonathan Rosenbaum, Raymond Durgnat and David Ehrenstein, “Obscure Objects of Desire: A Jam Session on Non-Narrative,” that appeared in Film Comment in 1978.

— Alex Ross: “A Hundred Years of Orson Welles” in The New Yorker.

— Jonas Mekas interviewed by Peter Bogdanovich in Interview magazine. (Via Will Stephenson.)

— Best of the year lists at Artforum: by John Waters; and J. Hoberman.

— An interview at Film Comment with the poet Susan Howe, who recently introduced a screening of Tarkovsky’s The Mirror in New York City.

— The theme of the new issue of NECSUS European Journal of Media Studies is “Vintage”.

— Lesley Stern’s lecture (in her charismatic voice and delivery), “How does (the) Cinema Feel About (the) Animal?” at SoundCloud. (Via Catherine.)

— I’ve been enjoying Kelley Conway’s new book on the films of Agnès Varda; David Bordwell has put up a post on the book.

— On the occasion of its 30th anniversary, the journal Australian Feminist Studies has put up 30 articles from its history for free download. (Via Adrian.)

pic: The hallucination of a scientist in Sector IX B.