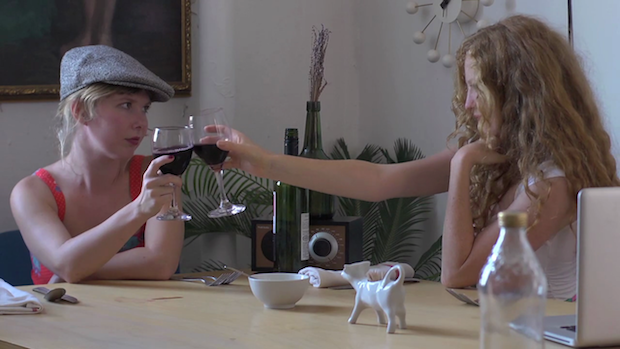 One of the “possible futures” of cinema (to use Gina Telaroli’s phrase) can be glimpsed on this Tumblr page, on which Telaroli and Kurt Walker have released their new feature films; I enjoyed both very much. Here’s to the Future! (Telaroli) and Hit 2 Pass (Walker) can be viewed for two more days — until November 22. I recommend reading this perceptive post on the films by Matthew Flanagan at his blog Landscape Suicide.

Both are exemplary works of “Small Cinema”–“the type of movies that have little to no chance of distribution,” as Walker says in this excellent conversation with Telaroli at MUBI. I particularly like what these two films have in common. For one, they are openly experimental, non-narrative works, but they wear their experimentalism lightly — free of gravitas but full of inventiveness and play. The other trait the films share is something very special: they are works that spring from a profoundly collective spirit, and they enact this spirit from moment to moment in the processes of their making — processes which are foregrounded in both films. As Vadim Rizov points out, Telaroli’s is the rare film that captures a female film director on set.

Telaroli is a gifted and fascinating figure in film culture: in addition to being a filmmaker, she is also a programmer, critic, and erudite cinephile. She makes her living as a video archivist at Martin Scorsese’s Sikelia Productions, but seems to move admirably and super-productively between her multiple film-related passions and projects. I also find her unfailingly articulate and thoughtful: check out her piece “More Women, Less Men, and a Possible Future of Cinema” at Filmmaker; the conversation between Telaroli and Phil Coldiron at the Brooklyn Rail; this interview with her about Here’s to the Future!; and the video interview with Ricky D’Ambrose.

— I wrote a liner essay for the Criterion DVD/Blu-ray box set of Satyajit Ray’s Apu Trilogy. (Apologies for the self-promotion!)

— An audiovisual essay by Cristina Álvarez López and Adrian Martin on Chantal Akerman’s Almayer’s Folly at MUBI; and the new issue of The Third Rail featuring Cristina, Adrian, McKenzie Wark, and many others. Also, Adrian on Maurice Pialat’s La gueule ouverte at Craig Keller’s blog Cinemasparagus; on Marlon Brando at Fandor; and on Akerman and “walking” at Filmkrant.

— A number of filmmakers choose their favorite films, at La Cinetek.

— A solid list by Bilge Ebiri: “The 50 Best Foreign-Language Movie-Musicals Ever”.

— Several new reminiscences of Sam Rohdie collected in a post by Catherine Grant.

— Boris Nelepo on Želimir Žilnik: “Film as a Handshake”.

— An interview with Mathieu Amalric in BOMB magazine. (Via Jake Mikler.)

— Kristin Thompson and David Bordwell on the long-lost German serial Homunculus (1916) and Expressionism.

— Via Corey: Ara Osterweil on the films of Ana Mendieta at Artforum.

— An appreciation of Stroheim’s The Wedding March by Neil Bahadur at Letterboxd.

— Avant-garde filmmaker Isiah Medina, whose 88:88 is one of the most interesting films of the year: at Filmmaker magazine; at Cinema Scope magazine (in conversation with Coldiron); and at Blackflash.

— A 3-part interview with art critic Dave Hickey at SFAQ.

pic: Here’s to the Future!