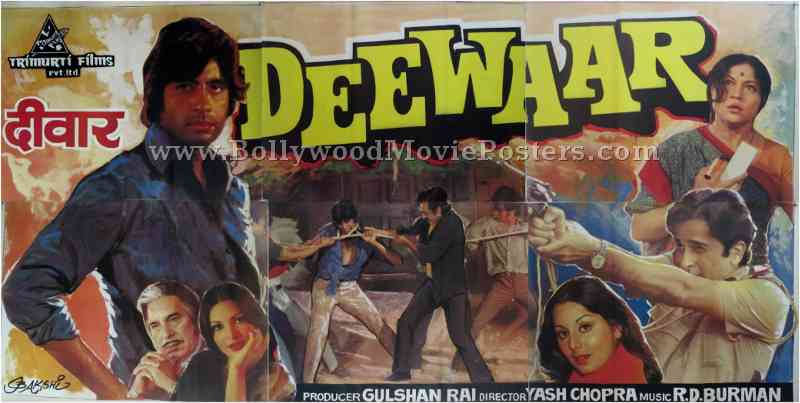 I’m going to hazard a guess that many of the super-cinephiles and critics I respect most — like Jonathan Rosenbaum, Adrian Martin, James Quandt, Dave Kehr, Joe McElhaney, or Chris Fujiwara, to name just a few — share one thing in common: They’ve seen a vastly greater number of Hollywood films than they have films from that other large popular cinema in the world, that of India.

There might be at least two reasons for this. First, for several decades after Independence, India officially endorsed and held up for global view only its “art films,” while being openly embarrassed of its popular films. This meant that Western access to Indian cinema, through film festivals and retrospectives, was more or less limited to art cinema (Satyajit Ray being its prime example). Second, even after availability of Indian popular cinema became a significantly lesser issue in the US with Netflix (which carries literally hundreds of terrific examples spanning the 1950s to the present), the sheer collective volume of output of this industry proves still to be impossibly daunting, a deterrent to even the most ambitious, adventurous cinephile.

A key reason why Indian popular cinema is worthy of sustained cinephilic and critical interest is the multitude of ways in which it is so unlike Hollywood cinema in its aesthetics. The two great Indian epics, the Ramayana and the Mahabharata, have had a powerful influence on Indian culture — including its narrative and non-narrative arts — through the ages. Their mark is also seen in popular films. Standing in contrast to the linear narratives of classical Hollywood, these two epics are compulsively digressive, creating large, dense, and bustling networks of stories and characters; their signature movement is sideways rather than forward.

The influence of classical Indian theatre — or Sanskrit theatre — has also been widely acknowledged. This theatre valued spectacle and stylization over narrative, the narratives themselves being highly episodic. Music and dance drove the spectacle, and were vital ingredients of this theatre. Finally, the Parsi theatre of the 19th century, with its heterogeneous mix of wildly varied elements both Indian and Western, was also a key antecedent. K. Moti Gokulsing and Wimal Dissanayake write:

Stylistically the plays displayed a curious mixture of realism and fantasy, music and dialogue, narrative and spectacle and stage ingenuity, all combined within the framework of melodrama. The Parsi theatre, with its lilting songs, bawdy humour, bon mots, sensationalism and dazzling stagecraft were designed to appeal to the broad mass of people, and they did. Elitist critics used epithets such as ‘hybrid,’ ‘coarse,’ ‘vulgar,’ ‘melodramatic,’ ‘sensational’ to describe these plays.

All of these constitutive influences — the age-old epics, classical Sanskrit theatre, Parsi drama — bequeath to Indian popular films a super-abundantly rich mix of high and low cultures, a vitality and fertility and creativity that hums through them. At its best, I’ve always felt, this is a cinema of constant surprise.

For cinephiles and critics interested in exploring Hindi popular cinema, I can recommend no better resource than Philip Lutgendorf’s website, which also features writings by Corey Creekmur. Lutgendorf and Creekmur are both professors at the University of Iowa with a deeply erudite and passionate interest in Indian culture. A beginner should first zero in on their lists of top 10 recommended Hindi films. Nearly everything on these two lists is available for rental at Netflix or can be purchased at websites such as Nehaflix.

The film reviews at Lutgendorf’s site are remarkable for the way in which they knowledgeably situate the details of the films within a context of Indian culture, language, history, mythology, etc. Let me illustrate — and simultaneously try to whet your appetites for this cinema — by sharing a few example excerpts.

“A classic example of the “mythological” genre—the original narrative genre of Indian-made films—and one of the most popular such films ever made, it gave a new (and characteristically Indian inflection) to the American pop-critical term “cult film,” for viewers often turned cinemas into temporary temples, leaving their footwear at the door, pelting the screen with flowers and coins, and bowing reverently whenever the goddess herself appeared (which she frequently did, always accompanied by a clash of cymbals). Despite tacky sets and the crudest of special effects, the film features a well-crafted script, with witty dialogs that abound in cultural references, and its devotional songs are extremely catchy (for years they could be heard blaring from temple loudspeakers all over India). Overall, the film has a charmingly playful quality, especially in its (often comically unflattering) portrayal of divine personalities, which is characteristic of folk Hinduism.”

““I’ve seen your feet; they’re very lovely. Don’t set them down on the earth—they’ll get soiled.” This metaphorical warning-note, penned by a romantic stranger and left between the toes of a sleeping woman in a railway compartment, forms a much-underscored motif in this classic courtesan film…The central theme of the film is the struggle for respectability of a tawai’if, an Indo-Islamic courtesan trained in poetry, music, and dance—a glamorous “public woman” whose career was to be an elegant companion (and potential lover) to affluent men, but for whom a “respectable” marriage and home was out of the question. Her beautiful feet—apart from being an erotic fetish—represent her mastery of the art of North Indian classical dance or Kathak, which tawai’if’s preserved and nurtured for several centuries. The “earth” that such feet must perforce touch, however, is ruled by patriarchal society with its crippling double-standards, which decreed that respectable women (who lived in parda or seclusion) could seldom be interesting to men, and that interesting women were seldom respectable. All courtesan fiction struggles with this divide…”

““Cricket,” wrote cultural theorist Ashis Nandy, “is an Indian game accidentally discovered by the English.” In his only-partly-whimsical 1989 book, The Tao of Cricket, Nandy develops this insightful if contra-historical sutra into a lengthy analysis of what he sees as the three great public-arena obsessions of contemporary India: cricket, politics, and the Bombay cinema—further arguing that all three adhere, in significant ways, to the same basic grammar of performance. Whether or not he ever read Nandy, director Ashutosh Gowariker had the genius to combine all three in one allegorical package, and to sell the idea to Aamir Khan, who then produced and starred in the resulting screenplay. The rest is cinematic history, and also one of the most successful Indian efforts at historical cinema: an epic-length (nearly four hour, yet surprisingly well-paced and gripping) parable in which the indigenization of cricket becomes a metaphor for the entire Indian Independence struggle, as well as for the larger and still-ongoing project of (to quote another book by Nandy) the “loss and recovery of self under colonialism.””

“Although there are no lack of contenders for the title, this might just qualify as the Compleat Amitabh Bachchan vehicle. It has: international smugglers, subplots aplenty, jokes about Bombay, Banaras, and other films, uproarious action sequences (the credits include “Car Chase Driving: Haji”—who I believe was once my cabbie in Bombay), classic-villain Pran as a crippled safecracker who can walk tightropes, Zeenat Aman at her foxiest, several unforgettable songs, and a totally tongue-in-cheek (or paan-in-cheek) attitude about itself. Practically everything good in the film—and there is a surfeit—comes in doubles: exploding suitcases, Interpol agents, escapes from tall buildings via ropes that are severed, cute kids, lots of entendres, and Bachchan himself, who puts in stellar performances as both the Really Evil Goan crime boss “Don,” who sports killer shades and razor-sharp bell-bottomed suits, and Vijay, his happy-go-lucky desi doppelganger from the banks of the Ganga, who chews paan incessantly, puts surma (collyrium) around his eyes, wears a lungi, and dances on the pavements of Bombay with bells on his ankles to earn coins to support the street urchins he’s adopted. Okay, you see the possibilities here…but you don’t really, unless you’ve seen the film.”

“East has been meeting West for a long time in Hindi films, often through the stereotype of a seductive yet menacing foreign Otherworld, wherein Indians lose their culture and fall into debauched Western ways (as in the 1970 film Purab Aur Paschim, “East and West,” which featured miniskirted, dyed-blonde Saira Banu as the locus of erotic interest and cultural anxiety). Such portrayals, reflecting a love-hate relationship with the West and with Indians who have settled there, underwent substantial modification by the 1990s, as Indians came to perceive their own culture as increasingly globalized, and their overseas kin—known in India, irrespective of citizenship or self-identification, as “NRIs,” (“Non-Resident Indians”)—as ongoing participants in it. Indeed, critics have observed that some of the spectacular hits associated with Bollywood’s “romantic revival” in the ‘90s seemed aimed as much at NRIs as at the domestic middle-class audience…”

— Creekmur on the influences that mark Guru Dutt’s Pyaasa (1957):

“Although the film constructs a distinct vision that would characterize Dutt’s remaining films — especially the explicitly autobiographical Kaagaz ke Phool (1959), about a failed film director — it’s interesting to speculate on Dutt’s possible influences when making Pyaasa: at least one song sequence (“Hum aapke aankhon men”), set in a cloud-covered dreamworld and hinting at Guru Dutt’s origins as a dancer, appears to pay a modest homage to the famous dream sequence of Raj Kapoor’s Awara (1951). More often the film — especially its final rally for a constructed hero that escalates into a riot — suggests Frank Capra’s similarly bleak Meet John Doe (1941), and a late scene between the unscrupulous publisher Mr. Ghosh and Meena at their breakfast table surely alludes to Citizen Kane (1941). (In Welles’ film, the famous “breakfast montage” ends as the first Mrs. Kane silently reads a copy of her husband’s rival newspaper; in Pyaasa, Meena holds up an issue of Life magazine with a crucified Christ on the cover.) The film’s consistently rich black and white photography suggests not so much American film noir of the 1950s, but its gloomy precedents in French poetic realist works like Carne’s Le Jour Se Leve (1939) or Quai des Brumes (1938), which paved the way not only for dark American crime films, but for the existential artist-outsiders who would be Vijay’s European soulmates following World War II.”

To build upon Lutgendorf and Creekmur’s lists of recommended films, I’d like to invite you all to suggest Hindi popular films you’ve enjoyed. (Perhaps one of my favorite fellow Indian bloggers, Srikanth Srinivasan of The Seventh Art, will recommend some of his favorites too.) Let me kick things off with a trio of my favorites that are not on Lutgendorf’s site: Raj Kapoor’s Bobby (1973), Ramesh Sippy’s Shakti (1982), and B. Subhash’s Disco Dancer (1983). In order to contain the scope of this post and make it more manageable, I have restricted it to Hindi popular cinema rather than including all of Indian popular cinema. But if you have non-Hindi cinema suggestions in mind (e.g. Tamil or Bengali or Telugu popular films), please feel welcome to share those as well.

If I might end on a personal note: I left India in 1986, and have followed Hindi popular cinema only sporadically since then. So, any recommendations of films made in the last 25 years will be especially welcome. Thank you.