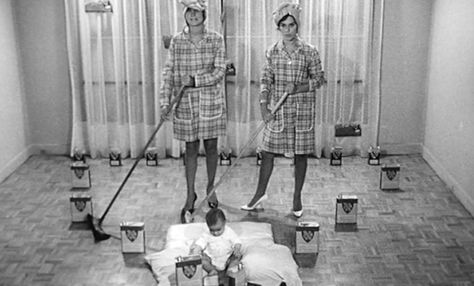 “Men are dangerous at forty: at that age they get sentimental.” — One teen to another in “Adieu Philippine”.

Playing in the New Wave series is Jacques Rozier’s rare Adieu Philippine (1962). What a smart, lyrical and witty film this is! A young TV camera operator meets, befriends and tries to seduce two young women who are aspiring actresses. Upon the film’s release, both Rivette and Rohmer named it a masterpiece and Truffaut found a genius “in the balance between the insignificance of the events filmed and the density of reality.”

The film is also a great inventory of the ‘signs’ of a nouvelle vague film: slender plot with episodic unfolding; documentary-like hand-held camerawork; location shooting; a looseness of framing and composition; the ‘un-authoritarian’ camera often following the actors around rather than choreographing them; naturalistic dialogue; sexual candor, and so on.

But what makes this film distinctive is a through-line of theme not uncommon to New Wave films but elevated here to a masterful organizing principle: the gulf between young and old.

New Wave histories by Richard Neupert and Michel Marie tell us that France of the 1950s was deeply interested in the manners and mores of the postwar generation. The journalist Françoise Giroud coined the term “New Wave” in a series of articles she wrote in the magazine L’Express (the equivalent of Time or Newsweek). They summarized the results of a mammoth sociological survey of youth; 8 million people between the ages of 18 and 30 were surveyed. This was the generation, she wrote, that soon “will have taken France in hand, their elders taking leave, the younger ones helping them move out.” The survey, by training a microscope on the lives of the young, also exhaustively set that generation apart from the older one.

It is precisely this distance–even alienness–with which youths viewed adults that is enacted ingeniously in the very mise-en-scène of Adieu Philippine. Adults in this film generally fall into two groups: (1) they are seen but not heard, only the young being privileged with speaking parts; or, (2) when they do speak, they come off as foolish, sentimental, gauche or out of touch. (An exception is a great family dinner-table scene with Maurice Garrel.)

In one scene in an auto-repair shop, four teens kick the tires and size up a used car (“The tires are as bald as Yul Brynner”, “We’ll never pick up any girls in this jalopy”). As their raucous repartee flies back and forth, there’s a cut to an older mechanic who is looking on at them silent and google-eyed as if he plainly doesn’t comprehend what language they’re speaking. In another scene shot guerrilla-style at an airplane landing strip, a boy and two girls flirt and wisecrack with each other while adults (bystanders who happened upon the film’s shooting, no doubt) hover and stare at the youths, as if gaping at specimens of some strange species at the zoo. In one of the film’s virtuosic passages, two girl-friends are followed on a busy Paris street by a non-stop lateral tracking camera. Passing them is a stream of older people, but we hear only the girls, loud and clear, and none of the adults (the film has silenced them).

Of course, the keen awareness of one generation succeeding another is also an important aspect of the story of French New Wave cinema itself. The “young Turks” who led the New Wave revolt against “le cinéma de papa” were trying to make their voices heard loud and clear first through their criticism and then through their films. In 1958, after the L’Express survey, Pierre Billard, the editor of Cinéma, put together an issue of “Forty Under Forty,” in which he identified 40 young filmmakers to watch. The New Wave was being born.

Some other interesting or off-the-beaten-path films showing this season:

— In the surrealism program: She Done Him Wrong, Monkey Business (Marx, not Hawks), Pour Vos Beaux Yeux (Henri Storck), and Hans Richter’s narrative feature Dreams That Money Can Buy (I’d never heard of this but it sounds fascinating).

— A Preminger series that includes The 13th Letter, Margin for Error and Such Good Friends, although Skidoo is absent because the estate refused permission.

Any thoughts/comments on the season’s films? Please feel free to share.

This just in: there’s a large, brand-new issue of Jump Cut now online.

pic: Adults in the foreground, youths in the background. We see the adults’ lips move but we hear no sound. Instead, the soundtrack is given over to the four young men.