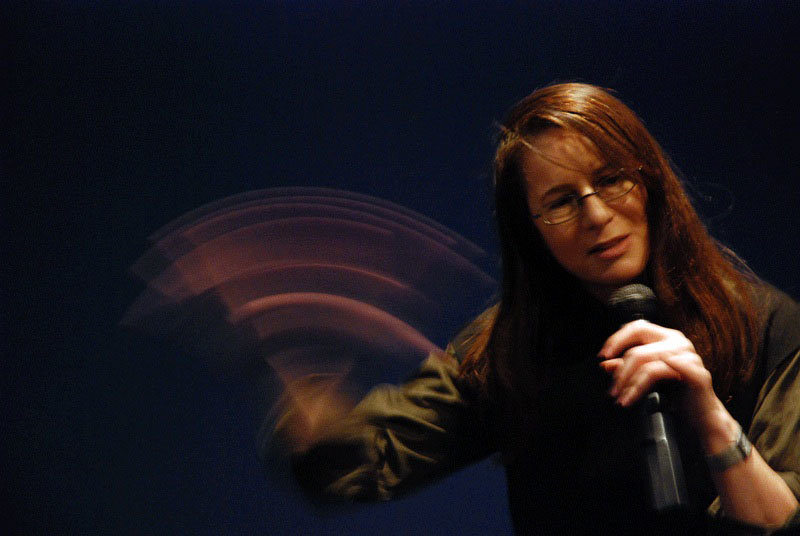 Fergus Daly’s documentary on avant-garde cinema, Experimental Conversations (2006), prominently features Nicole Brenez. I have transcribed all her comments, and am presenting them below in the order in which they appear in the documentary. Let me add that Brenez’s fiery, polemical text is enhanced by seeing/hearing her speak–she is clear and incisive, and her manner patient, assured, even playful. She seems a model of a good teacher; I wish I could attend one of her classes. The above YouTube clip from the movie features her and Philippe Grandrieux. I first learned about Experimental Conversations through Mubarak’s post from a few months ago; the post features yet another clip from the video. — Girish.

An experimental cinema considers cinema not in terms of its uses or conventions but rather its powers.

Experimental cinema involves the entire field of the passions. The so-called standard cinema standardizes the emotions, sensation, perception, and belief. In that cinema you don’t find anything except what you’ve known and felt already. Of course you can love this in the same way you love the same stories, read every evening, read by the same voice, your mother’s. Faced with this considerable restriction of sensible and emotional experience, experimental cinema re-opens the entire field of experience.

An image in avant-garde cinema is something irreducible to one conception. It’s the exploration of all possible conceptions which don’t pre-exist the exploration itself. For example, the industrial cinema falls within Hegel’s formula ‘art is what decorates our internal and external environments’. This ‘impoverished’ conception of art is precisely what the dominant cinema insists on, that it be a psychic and social ornament, what’s called a ‘diversion’, a conception not reprehensible per se but which is a problem because it’s imperialistic because it occupies the entire field of images. Avant-garde cinema explores every other conception of the image.

An oeuvre can be called great if the artist invents his/her own conception of the image according great power, strong symbolic properties, to the image.

Experimental cinema implies the field, the site, of a critical questioning of the world in general, of experience in the political, ethnological, anthropological and metaphysical senses.

Experimental cinema is the field of investigation of the very modalities of our apprehension and in particular modes of vision. The horizon in which this research is inscribed was sketched out by a minor character in Godard’s La Chinoise who posed this very beautiful question: ‘what if reality hasn’t yet been seen by anyone?’

The fundamental problem at stake in experimental cinema and all the practices it implies is to ceaselessly pose the question: What use is it to make an image or not make one? And an inevitable question follows: ‘What is art?’

Experimental cinema stands against the history of dominant images; we can cite Jonas Mekas’ sublime formula: ‘Hollywood cinema is merely a reservoir of material for artists to use later.’ Therefore experimental cinema is a major speculative initiative since its task is also to criticize, change, parody and destroy the dominant images, or to complete them, to reveal what they hide and falsify. This is one of the great undertakings of what’s known as the cinema of ‘found footage’.

What defines experimental cinema, whether it has political, scientific or aesthetic concerns, are a certain number of values: freedom of thought, critical awareness, therefore intellectual, economic, political independence, and an independent mode of existence.

Bresson said it 40 years ago: ‘a great film gives us an elevated notion of cinematography’, an elevated idea of forms is inseparable from the idea that cinema leaves a trace in the world, whether it’s a faithful trace or a contradictory one matters little, it’s a trace which alters our grasp of the world. An example from French cinema is Philippe Grandrieux, who in Sombre and La Vie Nouvelle, works in a significant way with colour and light to a degree that brings him into conflict with his technicians because they’re obliged to make camera movements or lighting set-ups which seem unimaginable to them technically, but which, when realized by Grandrieux, doing his own framing and camera movements, are shown to be extraordinary enrichments of the palette of optical possibilities. They didn’t know what the cinema could do until Grandrieux did it. For example, in terms of texture, he invents new possibilities for haze and blur in Sombre, furthered in La Vie Nouvelle, as well as his work with black in La Vie Nouvelle. It’s one of the greatest films of the present, because it’s about the responsibility of images as images, not bearing themes but as images themselves in a catastrophic world. An image can save the world and not merely diagnose it, you have to see La Vie Nouvelle to appreciate what’s at stake.

In the middle of the 20th century, around 1951, it became clear that the film industry had reduced a potentially limitless apparatus to a single standardized practice and therefore that it was urgent to rediscover other practices, other movements, other logics than that which was producing images for commercial consumption. Therefore for example you see the reintegration of the idea of artisanship in the cinema, bypassing the integrated industrial chain in favor of directly intervening with the hands, the filmmaker’s hands, giving rise to all the practices of painting on film, scratching, direct intervention, etc.

There have been three great decades: the 1890s when all films were beautiful, the 1920s for the unsurpassed invention of montage, the 1970s because of the formal beauty that triumphed.

One of the most precious to me because least recognized paths taken by experimental film is the demand for pure and radical mimesis, descriptive investigation, simple description, the violence of pure analogy, of a pure recording. There are many versions of this, for example the field of scientific film, supreme from a figural viewpoint, Marey’s films, or those of Lucien Bull, continued today by Alexis Martinet, Professor Berthier and many others.

The idea that art will redeem, I find this idea very beautiful, very problematic, you find it in all the sublime thinkers who are references for us on a day-to-day basis, Benjamin, Deleuze, and Godard, who revives them in cinema. Bizarrely, I prefer Adorno’s totally despairing belief [laughs] that art has no mission. Because, for whatever reason that makes us hold on to this idea of mission — it can be a sublime reason like Schiller’s belief that art can, in certain ways, teach us to emancipate ourselves — I prefer to think that an oeuvre doesn’t fix a mission for itself, but that it exists, breaks things open, introduces disorder into what was believed to be an ineluctable political and in particular ideological order, art as catastrophe in fact. [laughs]

— From the archives: I collected several Nicole Brenez links in this post from a year ago. Also, I just noticed that Steven Shaviro twittered: “Nicole Brenez’s ABEL FERRARA is the most beautiful book ever written on a single filmmaker. It gives Ferrara the respect & love he deserves.” (Steve–I’d love to read a post by you about this book!)

— Fergus Daly on Experimental Conversations, from the programme notes of the 2006 Cork film festival.

— A series of Robert Bresson posts continues at The Art of Memory.

— Film blog discovery of the week: A.P. at the Movies. Check out this detailed post on D.W. Griffith’s staging practices at Biograph.

Dennis Lim on Manoel de Oliveira in the NYT:

The cultural critic Edward Said, in his writings on “late style,” identified two versions of “artistic lateness.” One produces crowning glories, models of “harmony and resolution” in which a lifetime of knowledge and mastery are serenely evident. The other is an altogether more restless sensibility, the province of artists who go anything but gently into that good night, turning out works of “intransigence, difficulty and unresolved contradiction.”

Mr. Oliveira, force of nature that he is, represents both kinds of lateness, often in a single film. In this, as in so many other respects, he is his own special case. What are we to make of an artist who hit his stride in his 70s, and for whom “late style” is in effect the primary style? […]

“I think of film as a synthesis of all art forms,” Mr. Oliveira wrote. “And I try to balance the four fundamental pillars of film: image, word, sound and music.” […]

But he would be the first to caution against making too much of his longevity. “Nature is very capricious and gives to some what it takes from others,” he said. “I see myself being more admired for my age than for my films, which, being good or bad, will always be my responsibility. But I am not responsible for my age.”

A week of criss-crossing travel. I’ve just arrived in Cocoa Beach, Florida, to present a paper at an engineering systems conference. I’ll return home to Buffalo for a day to teach my classes mid-week, then fly down to New York City for the “Responsibilities of Criticism” seminar/conference featuring Nicole Brenez, Adrian Martin and Jonathan Rosenbaum. If I can manage to take some notes, I will try to post them here.