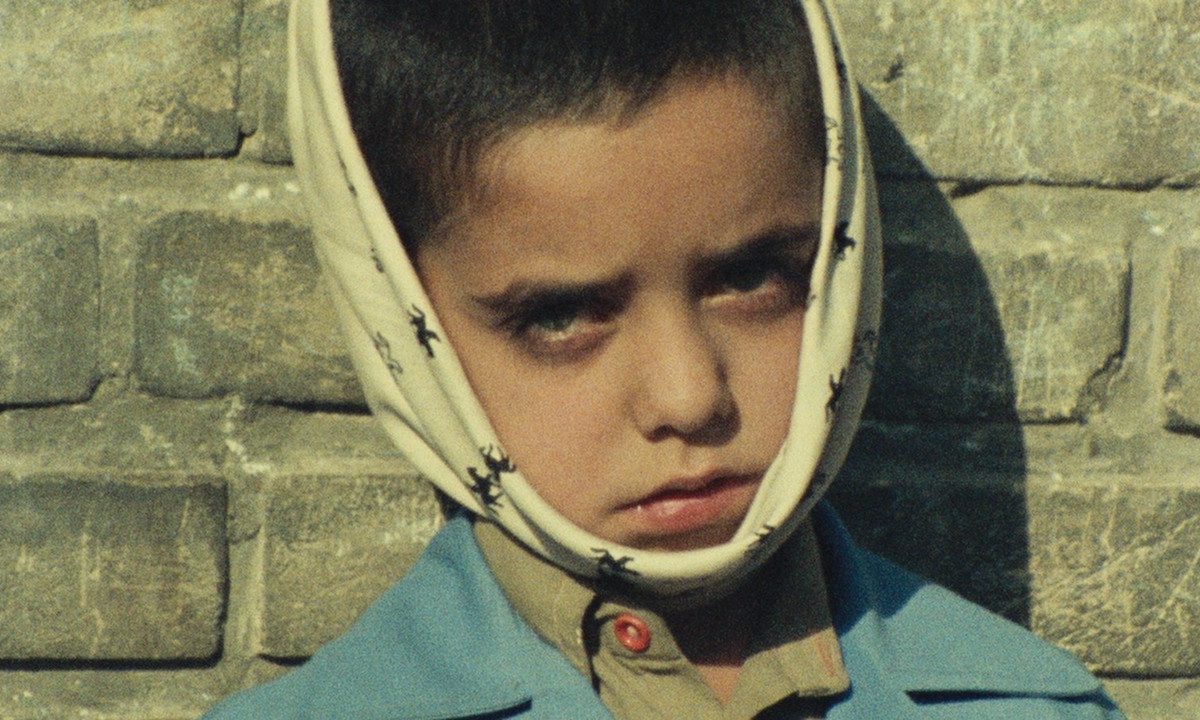 Last weekend, at MoMA, I caught about a dozen early—and rare—films by Abbas Kiarostami. I saw these films with Zach Campbell, who has a wonderful, insightful post about them. A few words about the films, in chronological order:

Bread and Alley (1970, 10 mins). Kiarostami’s first film. A boy is walking home in an alley and finds his way blocked by a barking dog. After some fretting, he throws the dog a piece of bread. The way now clear, he gingerly heads home, followed loyally by the dog. After he disappears inside his house, a new boy darts into the alley. The frame freezes.

Remember that great moment in Close-Up (1990), when a man kicks an aerosol can and Kiarostami abandons the story and characters for a minute to simply follow that clattering can down the street? The very first shot of Bread and Alley is strikingly similar: the boy kicks a box down the street for a good while, accompanied by some Paul Desmond-esque Latin jazz alto sax player on the soundtrack. Music is used inventively here: it only plays when the boy is in action; the soundtrack is silent when he is pondering, decision-making. When the new character appeared at the end, Chabrol’s Les Bonnes Femmes popped into my head, probably because it has a similar ending. A modest film but emblematic, containing ideas and tropes which will recur later.

Recess a.k.a Breaktime (1972, 14 mins). A boy is punished at school for breaking a window. At recess time, he leaves the school with his soccer ball, and wanders through alleys, finally ending up running by the side of the highway as cars roar by. A quietly daring and disconcerting film, ostensibly small but hinting at several possible (and possibly grave) ‘outer’ stories.

AK: “You may not believe it but my ideal film is my second film, Breaktime. This film is way ahead of Taste of Cherry in terms of form, audacity, avoidance of story-telling, and indeterminate ending. But the reaction of the critics at the time was so incisive and bitter that it hurled me toward recounting a story and making my next film, The Experience, which was a love melodrama.”

The Experience (1973, 60 mins). Not at all a melodrama, as AK too modestly suggests above, but a coming-of-age story about a poor errand-boy (orphan?) who works in a photographer’s office, and is smitten from afar by a well-off girl who waits for a schoolbus. He borrows a suit without asking (like in the later film The Wedding Suit) so he can walk past her house and impress her. He tries to get a job working in her home. An adaptation of a story by AK’s friend and influence, the early Iranian New Wave filmmaker Amir Naderi (The Runner).

This was one of my favorite films in the series, open-ended and elliptical. Virtually all our time in this hour-long film is spent with the boy, who is lonely and quite friend-less. For the first time, we notice in Kiarostami the superb use of ambient sound. Although it’s virtually without dialogue, this is not a quiet film. There are long uneventful passages on the streets of Teheran, accompanied by precise, vivid sounds. (The sound was dubbed, not live; AK’s next film, The Traveller, was the first in Iran to be shot with live sound.)

Two Solutions for One Problem (1975, 5 mins). [Clip above]. Jonathan Rosenbaum nails it: “[…] like a deadpan, Bressonian staging of one of Laurel and Hardy’s epic grudge matches.”

The Wedding Suit (1976, 54 mins). I was a bit exhausted for this one, and can’t really trust my impressions. The relative abundance of dialogue plus the suspenseful denouement—complete with Griffithian cross-cutting—threw me for a little loop. I’m sure it’s a good film, and I’d like to see it again sometime, but I think I preferred the open-ended storytelling approach of The Experience. A theme that has emerged strongly in AK by now: children living in their own world, apart from casually indifferent adults….

Solution No. 1 (1978, 11 mins). A man follows a wheel as it rolls (and rolls) down a mountainous road. Once again, like Bread and Alley and Close Up: a person following a moving object down the road! In an entirely different context—the directing of actors in Taste of Cherry—AK quoted this verse from the poet Rumi in an interview:

“You are my polo ball/Running before the stick of my command/I am always running along after you/Though it is I who make you move.”

Toothache (1979, 23 mins). A didactic documentary about the virtues of children brushing their teeth. Much of this film consists of a dentist droning monotonously to the camera about the proper care of teeth but while he’s doing this, the ambient sound is a killer: a child moaning and groaning with pain in the dentist’s chair!

There are a couple of other great touches, like an animated sequence of green, mean, saber-toothed cootie monsters hacking away with pick-axes inside the human mouth. (I was reminded of being similarly startled, out of the blue, by the cellphone-text animations in Jia Zhangke’s The World.) Also, a great shot of a blank classroom wall as a teacher takes attendance; as each name is called, a student’s head pops into the frame from below, acknowledges the roll call, and drops down below like a puppet’s head. One of numerous examples of the use of repetition in AK…

Orderly or Disorderly? (1981, 16 mins). Tries to demonstrate, didactically, the contrast of order and disorder by staging scenarios in pairs: e.g. boarding a schoolbus in single file versus all children rushing the bus at the same time. What is hilarious is that the filmmaker tries to control reality in order to film it but of course, reality refuses to co-operate: the demonstration breaks down when traffic at an intersection declines to ‘behave’ properly and provide a suitable example of ‘order’ for filming.

AK’s first self-reflexive film that specifically references filmmaking. Sharp and funny, definitely a highlight of his early work. The high-angle shots of candy-colored cars automatically evoke Jacques Tati’s Playtime. Apparently, the question mark of the title is frequently omitted (by mistake) when the film is cited or screened.

The Chorus (1982, 17 mins). An old man takes off his hearing aid to shut out the noises of the world and doesn’t hear his grand-daughters calling to him repeatedly at his door. A gorgeous film, with glowing colors and static camera compositions to show them off all the better. The use of color, light and subjective sound make it a film wonderfully aware of cinema and its means.

AK: “I regard sound as being very important, more essential than pictures. A two-dimensional flat image is all you can achieve with your camera, whatever you may do. It’s the sound that gives depth as the third dimension to that image. Sound, in fact, makes up for this shortcoming of pictures. Compare architecture and painting. The former deals with space while all you have in painting is surface.”

Fellow Citizen (1983, 52 mins). A fascinating and productively maddening film! A camera records one car after another coming to a stop at a traffic intersection, and the drivers pleading their case about why they need to get through. The traffic cop listens to each appeal, and decides yes or no. We see this happen a couple of hundred (?) times. End of film. Apparently, AK boiled 18 hours of footage down to 1.

Like Warhol’s Screen Tests or The Chelsea Girls, the film sets up a structure (car enters frame, driver appeals to cop, they argue, cop makes a decision) and then generates multiple instances from that structure. Like Warhol, the film makes you think about boredom and how we respond to it. Personally, I chafed against the film for a good twenty minutes, then broke down and started paying close attention (because: what else to do?) to the occupants, the way they were dressed, how they spoke and gestured, their body language, etc. The relentless repetition mesmerized (stupefied?) me and once ‘in the zone’ I could have continued watching it for a good while longer (I think). I’m not sure I’d want to see such films all the time but some occasional (and temporary) perceptual rewiring isn’t such a bad thing….

The Iranian New Wave broke in the West mainly in the 1990’s. We are familiar with quite a bit of Iranian cinema since then: AK, the Makhmalbafs, Jafar Panahi, Abolfazl Jalili, Bahman Ghobadi, etc. But I’m wondering if we can collect here some examples/recommendations of earlier Iranian film and filmmakers (i.e. pre-1990’s). I’ve seen a little Darius Mehrjui, and that’s probably it. So, any suggestions would be helpful and welcome….