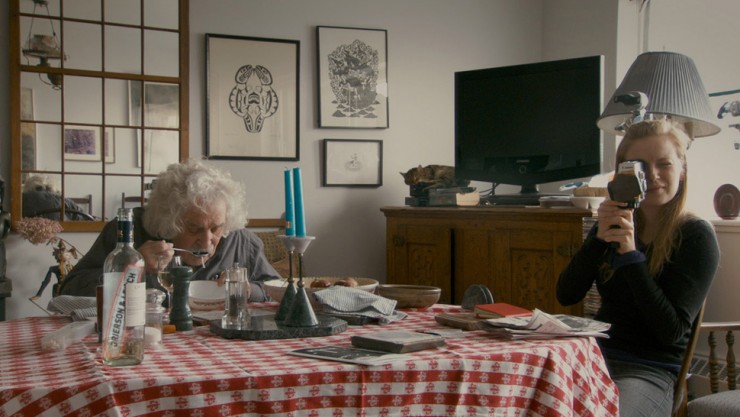 Here’s my single favorite thing about blogging: being able to educate oneself in public. Going through this process—trying to move forward, stumbling, groping, occasionally finding—in full view of the world does not always stroke one’s ego. Each week you find yourself writing not about what you know but about what you perhaps hope to learn from the process of watching, reading, and struggling to think through and articulate. And Lord knows we don’t do it for material gain or reknown or the reason many of us learned our first chords on the guitar (why, to meet girls, of course!). Still, the opportunity to educate oneself in public is a luxury, and I’m thankful for it….

A confession: Although I’ve watched—and enjoyed—documentary films for years, I’ve done almost no systematic reading about them as a form. But recently I found myself devouring two intelligent and lucid books by Bill Nichols, Introduction to Documentary (2001) and Representing Reality (1991). They make me want to revisit all the great docs I’ve seen so I can see them with a new set of eyes. And catch up with scores of canonical docs I’ve never seen.

Nichols proposes six types—or modes—of documentary. His classification scheme has been rattling around, throwing off sparks in my head, all week. Let me briefly describe it to you. I’m often paraphrasing Nichols below, and borrowing many of his example films.

1. Poetic documentaries, which first appeared in the 1920’s, were a sort of reaction against both the content and the rapidly crystallizing grammar of the early fiction film. The poetic mode moved away from continuity editing and instead organized images of the material world by means of associations and patterns, both in terms of time and space. Well-rounded characters—’life-like people’—were absent; instead, people appeared in these films as entities, just like any other, that are found in the material world. The films were fragmentary, impressionistic, lyrical. Their disruption of the coherence of time and space—a coherence favored by the fiction films of the day—can also be seen as an element of the modernist counter-model of cinematic narrative. The ‘real world’—Nichols calls it the “historical world”—was broken up into fragments and aesthetically reconstituted using film form.

Examples: Joris Ivens’ Rain (1928), whose subject is a passing summer shower over Amsterdam; Laszlo Moholy-Nagy’s Play of Light: Black, White, Grey (1930), in which he films one of his own kinetic sculptures, emphasizing not the sculpture itself but the play of light around it; Oskar Fischinger’s abstract animated films; Francis Thompson’s N.Y., N.Y. (1957), a city symphony film; Chris Marker’s Sans Soleil (1982).

2. Expository documentaries speak directly to the viewer, often in the form of an authoritative commentary employing voiceover or titles, proposing a strong argument and point of view. These films are rhetorical, and try to persuade the viewer. (They may use a rich and sonorous male voice.) The (voice-of-God) commentary often sounds ‘objective’ and omniscient. Images are often not paramount; they exist to advance the argument. The rhetoric insistently presses upon us to read the images in a certain fashion. Historical documentaries in this mode deliver an unproblematic and ‘objective’ account and interpretation of past events.

Examples: TV shows and films like A&E Biography; America’s Most Wanted; many science and nature documentaries; Ken Burns’ The Civil War (1990); Robert Hughes’ The Shock of the New (1980); John Berger’s Ways Of Seeing (1974). Also, Frank Capra’s wartime Why We Fight series; Pare Lorentz’s The Plow That Broke The Plains (1936).

3. Observational documentaries attempt to simply and spontaneously observe lived life with a minimum of intervention. Filmmakers who worked in this sub-genre often saw the poetic mode as too abstract and the expository mode as too didactic. The first observational docs date back to the 1960’s; the technological developments which made them possible include mobile lighweight cameras and portable sound recording equipment for synchronized sound. Often, this mode of film eschewed voice-over commentary, post-synchronized dialogue and music, or re-enactments. The films aimed for immediacy, intimacy, and revelation of individual human character in ordinary life situations.

Examples: Frederick Wiseman’s films, e.g. High School (1968); Gilles Groulx and Michel Brault’s Les Racquetteurs (1958); Albert & David Maysles and Charlotte Zwerin’s Gimme Shelter (1970); D.A. Pennebaker’s Don’t Look Back (1967), about Dylan’s tour of England; and parts (not all) of Jean Rouch and Edgar Morin’s Chronicle Of A Summer (1960), which interviews several Parisians about their lives. An ironic example of this mode is Leni Riefenstahl’s Triumph Of The Will (1934), which ostensibly records the pageantry and ritual at the Nazi party’s 1934 Nuremberg rally, although it is well-known that these events were often staged for the purpose of the camera and would not have occurred without it. This would be anathema to most of the filmmakers associated with this mode, like Wiseman, Pennebaker, Richard Leacock and Robert Drew, who believed that the filmmaker should be a “fly-on-the-wall” who observes but tries to not influence or alter the events being filmed.

4. Participatory documentaries believe that it is impossible for the act of filmmaking to not influence or alter the events being filmed. What these films do is emulate the approach of the anthropologist: participant-observation. Not only is the filmmaker part of the film, we also get a sense of how situations in the film are affected or altered by her presence. Nichols: “The filmmaker steps out from behind the cloak of voice-over commentary, steps away from poetic meditation, steps down from a fly-on-the-wall perch, and becomes a social actor (almost) like any other. (Almost like any other because the filmmaker retains the camera, and with it, a certain degree of potential power and control over events.)” The encounter between filmmaker and subject becomes a critical element of the film. Rouch and Morin named the approach cinéma vérité, translating Dziga Vertov’s kinopravda into French; the “truth” refers to the truth of the encounter rather than some absolute truth.

Examples: Vertov’s The Man with a Movie Camera (1929); Rouch and Morin’s Chronicle of a Summer (1960); Ross McElwee’s Sherman’s March (1985); Nick Broomfield’s films. I suspect Michael Moore’s films would also belong here, although they have a strong ‘expository’ bent as well.

5. Reflexive documentaries don’t see themselves as a transparent window on the world; instead they draw attention to their own constructedness, and the fact that they are representations. How does the world get represented by documentary films? This question is central to this sub-genre of films. They prompt us to “question the authenticity of documentary in general.” It is the most self-conscious of all the modes, and is highly skeptical of ‘realism.’ It may use Brechtian alienation strategies to jar us, in order to ‘defamiliarize’ what we are seeing and how we are seeing it.

6. Performative documentaries stress subjective experience and emotional response to the world. They are strongly personal, unconventional, perhaps poetic and/or experimental, and might include hypothetical enactments of events designed to make us experience what it might be like for us to possess a certain specific perspective on the world that is not our own, e.g. that of black, gay men in Marlon Riggs’s Tongues Untied (1989) or Jenny Livingston’s Paris Is Burning (1991). This sub-genre might also lend itself to certain groups (e.g. women, ethnic minorities, gays and lesbians, etc) to ‘speak about themselves.’ Often, a battery of techniques, many borrowed from fiction or avant-garde films, are used. Performative docs often link up personal accounts or experiences with larger political or historical realities.

Examples: Alain Resnais’ Night And Fog (1955), with a commentary by Holocaust survivior Jean Cayrol, is not a historical account of the Holocaust but instead a subjective account of it; it’s a film about memory. Also, Peter Forgacs’ Free Fall (1988) and Danube Exodus (1999); and Robert Gardner’s Forest of Bliss (1985), a film about India that I’ve long heard about and look forward to seeing.

Of course, these categories are—as Nichols might readily admit—not meant to be definitive. Instead, they can serve valuably as a catalyst for us to reflect on the documentary film genre and the various alternative approaches within it. I suspect it’s common for a particular film to be a hybrid of two or more modes, with one of them perhaps being ‘dominant.’

LINKS. Juicy film reading today: the new issue of Screening The Past is up, and in addition to many other pieces, it features Adrian Martin on Claire Denis and William Routt on Fritz Lang. Also: How blogging relates to “real life”—see Steve Shaviro, Kim Dot Dammit, and Jodi at I Cite; Kristin Thompson on animated films; The Siren on Buñuel’s Viridiana; via Brad: Robert Christgau’s Consumer Guide returns, thanks to MSN; Walter at Quiet Bubble on a grand year for women in comics; Peet Gelderblom and his readers speculate about the future of cinema; and last but never least, Darren on Jim Jennings’ Silk Ties.