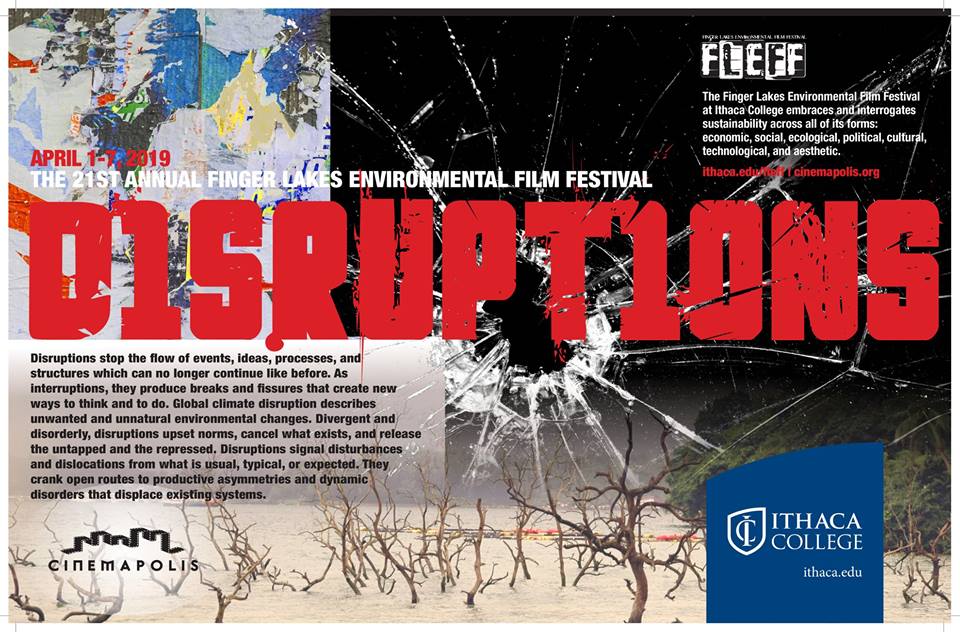 I have recently returned from Ithaca, New York, where I spent a few rewarding days at the Finger Lakes Environmental Film Festival (FLEFF). FLEFF is run by Patricia Zimmermann and Tom Shevory, both faculty at Ithaca College, the major sponsor of the festival.

FLEFF is unlike other film festivals I’ve attended because it consciously gathers an unusual diversity of people in a single space: cinephiles, film/media makers, critics, scholars, curators, journalists, and students. Further, the conference is designed as much around opportunities for discussion and discourse as it is around watching films. For instance, I spent an entire day in a series of seminar-style, round-table sessions called FLEFF Lab, with about 20 participants from a variety of backgrounds. The discussions revolved around this year’s festival theme of “Disruptions”–defined broadly and imaginatively here, and roaming far beyond the term’s conventional, pro-capitalist use in the area of tech-enabled innovation.

FLEFF self-identifies as an “environmental” film festival, but its use of the word is expansive. Since the forces that are causing our ecological crisis are fundamentally capitalist, and since those forces ravage both the natural environment and all non-human and human life on the planet, the purview of the festival turns out to be all-encompassing. The scope of work is correspondingly broad: not only films, but also concerts, installations, theatrical events, and new media works are featured on the program.

FLEFF was founded in 1997 at Cornell University, and then moved to Ithaca College under the leadership of Zimmermann and Shevory 15 years ago. Patty and Tom both wear multiple hats: they are scholars, teachers, film/media lovers and programmers. Patty, one of the most prolific and well-reputed scholars in film/media studies, also runs a blog (well worth digging into) called Flaherty Stories, which gathers a wide range of personal accounts of experiences at the Robert Flaherty Film Seminars. (She is the author, with Scott Macdonald, of the 2017 book The Flaherty: Sixty Years in the Cause of Independent Film.) Tom, who has written several books on issues related to law and public policy, is also an avid cyclist whose last book The Great Lakes at Ten Miles an Hour, is an “account of his travels and explorations of the geological, environmental, historical, and cultural riches harbored by these great inland seas.” Together, they are the soul of the festival: in seminar rooms, theaters, or at Red’s, the local bar where festival attendees ritually converge for parties each night.

One of the highlights of this year’s festival was a pair of silent films with live musical accompaniment. First, a 1923 version of Oscar Wilde’s Salome, starring the now mostly forgotten Russian-born star Alla Nazimova, who at one time commanded a bigger Hollywood salary than Mary Pickford. Openly bisexual, Nazimova (according to Ryan Smillie) hired the costume designer, art director and production designer Natacha Rambova (purported to be her lover) to create the look of this film, which is a striking blend of bold, graphic minimalism and Art Nouveau. Smillie calls it “America’s first art film.”

One of only seven surviving Argentine silent films, El Ultimo Malon (1917; sometimes translated as The Last Indian Attack) dramatizes the last Indigenous rebellion in Argentina, by the Mocovi. The cast, composed almost entirely of non-professional actors, reputedly numbered many who were part of the original 1904 uprising. The director, Alcides Greca, even appears briefly as himself in the film, which is a work of fiction with intriguing elements of ethnographic documentary. Something I’d never seen before: Both silent performances were preceded by special, one-time theatrical performances (co-written by Patty Zimmermann) that creatively surrounded what we were about to see with a rich production and socio-cultural context.

The other high point of the festival for me was a screening of short works by the experimental filmmaker Kelly Gallagher titled “Feminist Animations.” Gallagher described herself as being motivated by the twin forces of love and rage. This self-characterization was spot-on; the films in the program were divided between the deeply personal and the viscerally political. Her aesthetic, which makes playful and powerful use of cut-out animation collage, is accessible and affecting. Gallagher is a former union organizer, and her commitment to collectivist radical politics comes blazing through both in her films and beyond them: for example, she has made all her work available to watch for free at Vimeo. Let me recommend three short films as a starter: “More Dangerous than a Thousand Rioters,” an experimental documentary on the life of revolutionary Lucy Parsons; “From Ally to Accomplice,” which is about figures such as John Brown and Marilyn Buck, who went beyond being simply “allies” to placing themselves at significant risk for their passionately-held beliefs; and “The Herstory of the Female Filmmaker”. This interview with her is a wonderful read.

I regret that, as a cinephile, film festival habitué, and three-decade resident of New York state, it’s taken me this long to discover FLEFF and make my first film trip to Ithaca.