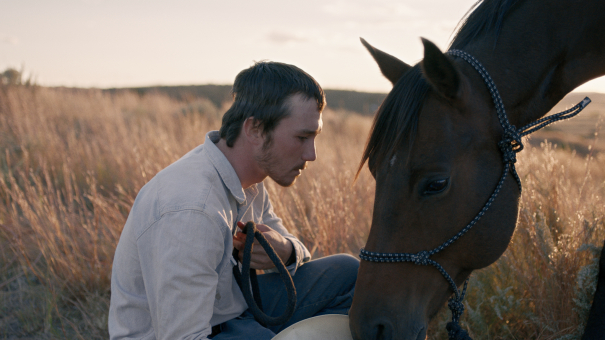 Years from now, when we look back at 2017’s TIFF, we might recognize it as historic: the moment when one of the world’s largest film festivals launched an initiative to systemically address the imbalance between men- and women-made movies. As a result, 33% of the films screened at the festival this year were directed by women—significantly higher than ever before. I spent 8 days in Toronto and, as it turned out, the best and most memorable films I saw there were nearly all made by women. Among them was Chinese-American director Chloe Zhao’s The Rider, about a young Lakota Sioux cowboy, set on a reservation in Pine Ridge, South Dakota.

The film tells the story of Brady, a rodeo rider and horse trainer in his early twenties who has sustained a severe rodeo injury to the head. He has been advised by his doctor to give up riding, but he cannot accept this verdict. Given all the expectations culturally instilled in him since childhood, that would be a personal defeat. As his condition worsens, his frustration and despair deepen. Remarkably, we witness Brady’s struggle within a vivid social context: his tough-guy dad Tim, his autistic sister Lilly, and his cowboy friends including Lane, formerly headed for rodeo success but now in a facility, permanently handicapped by a fall from a horse.

A key theme in the film singled out by critics—not to mention by Zhao herself, in interviews—is the gradual vanishing of certain traditions and practices. Todd McCarthy, in Variety, laments the passing of an era which valued “stoic reserve” and “a tough way of life, one that produces and requires a strong sense of identity and values.” In an interview with Bilge Ebiri, Zhao remarks on how Brady “honors a way of life that is rapidly disappearing in Middle America, this identity people have that they try to hold onto.” The film is especially effective because Brady and his family play versions of themselves, and it was his own serious injury from a fall that inspired Zhao to create a fictional narrative around it.

I must be honest: McCarthy’s nostalgic celebration of a “strong sense of identity and values” makes me a little uneasy. Rather, what sparked my own personal resonance with the film was something different: the way Zhao dramatizes the quiet and relentless pressures of masculinity and its norms in Brady’s everyday life. What is palpable in The Rider is the presence of a restrictive view of what a man is or does: we see, hear, and feel it as a permanent background in Brady’s interactions with his dad, with his friends, at the rodeo, and in his world at large. We also witness Brady’s inner struggle with this masculinist set of values, and the way it makes him feel—acutely, a failure, ashamed to walk away from the rodeo.

The sociologist Michael Kimmel, one of the leading scholars of masculinity, based his much-cited book Guyland (2008) on field interviews he conducted with hundreds of men across the country—all between the ages of 16 and 26, the period of transition from “boys to men.” In the book, he describes the key features of the masculine code, “the collection of attitudes, values and traits that together composes what it means to be a man” at this time in America. Among them is the injunction to not admit weakness. Think of the variety of everyday sayings that echo this quality: “Take it like a man”; “Ride or die”; “It’s all good.”

To exhibit weakness is to admit emotional vulnerability—and thus to risk association with the feminine. “We’ve become relentless cowboys,” Kimmel writes, using an analogy that turns out to be accidentally apt here, “riding the fences, checking the boundary line between masculinity and femininity, making sure nothing slips over. The possibilities for being unmasked are everywhere.” To be a man is to do everything possible to keep the mask in place—everything is fine, everything is under control—belying the turmoil under the surface.

Some of The Rider’s most touching scenes are those where Brady trains and interacts with horses: where we witness his feminine side. He appears preternaturally sensitive to the animals, their every movement, posture, and glance, and speaks to them with a sense of true intimacy. But this sensitivity manifests itself in a socially sanctioned setting, applied to a specific kind of work—thus legitimizing it. By contrast, we witness a scene late in the film when Brady breaks down and cries in his car; Zhao confessed that shooting this was not easy. Even though she was in the car alone with him and her camera, the scene proved enormously demanding for Brady because, as he told her, it had been seven years since he last cried. (At the time of filming, he was 20 years old.) Zhao recalls that once the scene was done, Brady disappeared for a while because he didn’t want anyone to see or suspect that he had been crying.

Kimmel argues that masculinity in our culture hinges upon the repudiation of the feminine. From an early age, boys are taught to suppress their emotions and deny their emotional needs, and studies have shown that boys are four times more likely than girls to be diagnosed as “emotionally disturbed.” Paraphrasing social psychologist Robert Brannon, Kimmel writes: “What makes a man so reliable in a crisis is not that he is able to respond fully and appropriately to the situation at hand, but rather that he resembles an inanimate object. A rock, a pillar, a species of tree.” He even quotes the notoriously right-wing David Mamet, who makes an observation that is painful but contains a measure of truth: “Women, in men’s minds, occupy such a low place on the social ladder of this country that it’s useless to define yourself in terms of a woman. What men need is men’s approval.” Kimmel adds: “[In our culture] Women are for possessing, not emulating.” Little wonder that we are now living through a year that has seen the most flagrantly misogynist President, the highest mass killings count in this country for a decade (98% of them committed by men), and an unprecedented deluge of revelations of sexual harassment and assault by men in high places.

As we see in the film, masculine ideology finds its channels of transmission primarily through networks of interactions between men—such as friends and father figures—all of whom play a part in quietly policing male behavior. In an interview with Darren Hughes, Zhao noted that Brady and his friends “raise each other,” forming a close brotherhood. (His arm even bears the tattoo “Brothers Forever.”) Given Brady’s declining health, his dad Tim makes it clear that he does not want him to continue riding, asking in frustration at one point, “Why don’t you listen to me?” Brady reply is heartbreaking: “I’ve been listening to you all these years. You’re the one who said be a cowboy and man up.” The construction of masculinity is a life-long process of repetition and reinforcement that begins early in childhood, and performs its work on a daily basis—making it hard or impossible to undo casually.

If masculinity was (for me) the primary theme of The Rider on first viewing, there is a secondary, understated theme at work that also deserves close attention: the conditions of reservation life. As Zhao remarked to Darren about the people in the film:

They live in these government houses that have stripped away their connection with the land for generations. They’re stuck in this man-made, fluorescent, industrial-looking world. It’s claustrophobic—like, eighteen people per house. And then you go outside and it’s just majestic. That contrast is quite confusing. It says everything about what we did to the Native Americans. So we wanted to use colors that are found in nature in the house: blue for Brady, pink for Lilly. And then use a lot of fluorescent light.

I look forward to rewatching The Rider through this lens of life on the reservation—and also catching up with Zhao’s previous film, the documentary Songs my Brothers Taught Me (2015), which is set on the same reservation, and tells the story of the relationship between a Lakota Sioux brother and his younger sister.