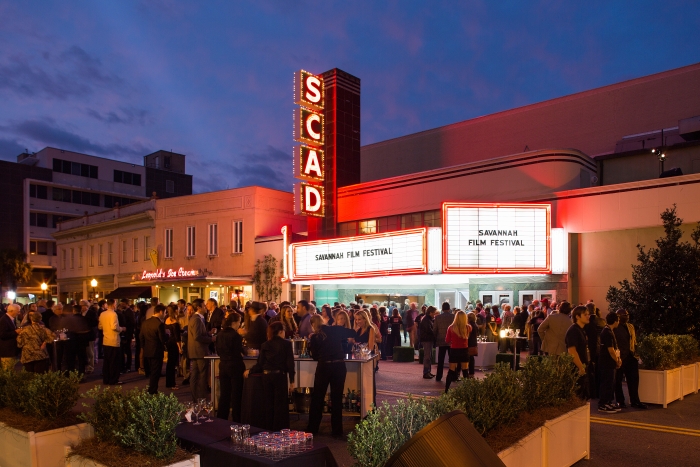 Last month, cinema scholar Caryl Flinn and I spent a few days at the Savannah Film Festival as guests of the cinema studies department of the Savannah College of Art & Design (SCAD). Our host was faculty member Tracy Cox-Stanton, who founded and edits the online cinema journal The Cine-Files. The three of us watched and talked films from morning to night, and I was reminded again of the special social value of the film festival experience. As a cinephile whose conversations about film are for the most part conducted online, I especially cherish these kinds of in-person social opportunities that only come along a couple of times each year.

In addition to attending the festival, we had an invigorating session with graduate students—the topic of our discussion was the “multiple modes of writing” about film—and also appeared on a panel during the festival. The panel was broadly devoted to explaining, to a public, largely non-cinephile audience, what “cinema studies” was; what work it did; and how it might be a useful lens through which to view and analyze the films we were seeing at the festival.

The three most interesting and rewarding features I saw at the festival were:

— James Toback’s Seduced and Abandoned, a documentary about Toback and Alec Baldwin going to the Cannes Film Festival with an experiment: to meet with producers and actors and raise money to make an erotic/political thriller called Last Tango in Tikrit. To what extent they are serious about making this film remains (productively) unclear; they are equally interested in taking the measure of the state of film financing today, and revealing its conservatism and its absurdities.

— The Spectacular Now, a teen drama by James Ponsoldt with two gifted, charismatic lead actors (Miles Tellier and Aimee Finicky, the latter from Alexander Payne’s The Descendants). It belongs in a lineage of contemporary teen films like The Myth of the American Sleepover that are influenced by art cinema—perhaps not quite as powerfully as Gus Van Sant’s Elephant or Paranoid Park—but nevertheless using graceful, long takes that patiently observe the nuances of performer interactions.

— Payne’s Nebraska, impeccably shot and cut, with a great performance by Bruce Dern, but flawed because of the stark difference in the way it treats its aging male and female lead characters, who are played by Dern and June Squibb. Both characters are abrasive and bitter, but the man’s personality and predicament acquire a tragic, moving quality over the course of the film while the woman character accrues no such dignity, remaining mostly shrill and grating …

Two short films made by SCAD students stood out—but in contrasting fashion. Dirt (Justin Andrews & Jae Matthews) is an unsettling and affecting mood piece set in a working-class milieu, with Dardenne-like attention to social detail; and Valiant (Rachel Horstmann) is a war film about several generations of an American military family, as unreflectively jingoistic and triumphalist as it is affluent in its production values.

After making a habit of attending only large film festivals like Toronto, I enjoyed the unexpected intimacy and relaxed feel of a smaller festival such as Savannah’s.

— “Screen and Surface, Soft and Hard: The Cinema of Leos Carax” by Adrian Martin and Cristina Álvarez López; and Cristina, translated by Adrian, on Leos Carax’s Les amants du Pont-Neuf (1991). At Transit. Also: Adrian has a piece on Marlon Brando at Fandor.

— Ricky D’Ambrose has made a video in which he speaks to Chantal Akerman about her 1970s films. At MUBI. Earlier: his terrific video interview with Dan Sallitt. Related: Christopher Small interviews Sallitt about The Unspeakable Act, which is now out on DVD.

— J. Hoberman, “The Cineaste’s Guide to Watching Movies While Stoned”. At The Nation. In other news, Hoberman will be taking over the New York Times DVD column from Dave Kehr.

— There is a new issue of Screening the Past, with a special section on “Aesthetic Issues in World Cinema”.

— Darren Hughes and Blake Williams have a conversation about Ramon Zürcher’s The Strange Little Cat.

— The new issue of NECSUS: European Journal of Media Studies features the theme of “waste”.

— Jonathan Rosenbaum is a champion of the filmmaker Peter Thompson, whose work has just come out on DVD. Also at Jonathan’s site: his essay “Gertrud as Nonnarrative: The Desire for the Image”; and an introduction to a just-released collection of Charles Schulz’s Sunday color strips of Peanuts, in which he draws a comparison between Schulz and Ozu.

— Lots of good links in this post from Matthew Flanagan.

— Personal accounts by projectionists around the world. At caboose.

— An interview with scholar Gregory Ulmer. At Full Stop. Part of their series “Teaching in the Margins”. Via Adrian.

— This looks very interesting: a series of films by Norwegian filmmaker Anja Breien, who made a film called Wives (1975), an ‘answer’ to John Cassavetes’ Husbands (1970). At Museum of the Moving Image.

— An entertaining interview with Greta Gerwig. At The Dissolve.

— Mark Fisher, “Anti-Humanism and the Humanities in the Era of Capitalist Realism”. Via Steven Shaviro.

— Letters between Nadezhda Tolokonnikova of Pussy Riot, who is in prison, and Slavoj Žižek.