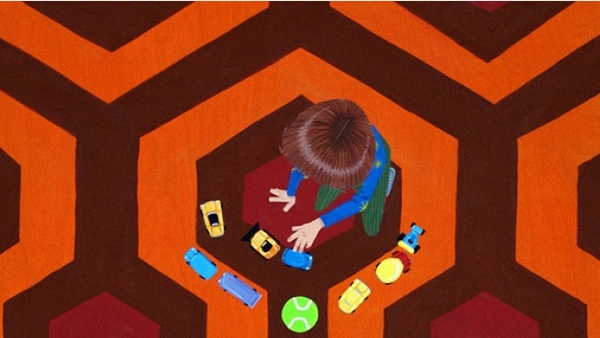 Jonathan Rosenbaum and I caught a screening of the documentary Room 237 in Toronto, but we had to dash off to separate engagements soon after, and didn’t get a chance to talk about it. I found the film fascinating but troubling. The next day I discovered that he had put up a post that spoke to some of my concerns. I highly recommend reading it.

As is now well known, the subject of Rodney Ascher’s Room 237 is Stanley Kubrick’s The Shining (1980). It gathers a half-dozen people obsessed with the film, and interweaves their analyses and commentaries. They propose many theories: The Shining is about the Holocaust; or the genocide of American Indians; or a faked moon landing engineered by Kubrick; or the “impossible architecture” of the Overlook Hotel; and so on. Ascher himself never intervenes to pass any kind of judgment on which of these theories is ingenious or plausible or unlikely or ridiculous.

Here’s what disconcerts me about the movie: It is a disturbing representation of the practice of film criticism. Not only do the commentators in Room 237 advance theories about The Shining; they use techniques of close analysis; and they offer “readings” by drawing upon evidence from the film. So, what is wrong with this detailed depiction of film criticism in action? And what is the relationship between the practice of film analysis depicted in the film and “good” film analysis, by which I mean the kind of film analysis we as critics want to convince the public is worthy?

There are at least two problems with Room 237’s depiction of criticism. First, it is an activity that often comes across as outré, freakish or crackpot. (Witness the range of theories proposed.) Second, and more important, film criticism here is a largely apolitical, hermetic activity that moves inwards, carving out a self-enclosed space, the space of a cognitive puzzle, a puzzle to be solved based on clues well hidden by a genius filmmaker. (Prominent mention is made of Kubrick’s 200 IQ and his prowess at chess.)

Spotting hidden references to the Holocaust or to the genocide of Native Americans is not in itself a critically or politically reflective activity. The Shining (while being a wonderful film, for many reasons) simply does not engage with these weighty historical traumas. It is not “about” them in any meaningful way. And neither does it have to be in order to be a great film. But when Room 237 represents film analysis in a manner that treats it as little more than a clever puzzle-solving exercise, it gives no hint as to the social value and political/aesthetic worth of this public activity. It never intuits what is truly at stake in the activity of paying close, analytical attention to films.

The movie makes one radical suggestion: viewing The Shining simultaneously on two screens, one projected forwards and the other backwards. A brief and striking commentary follows on a few uncanny correspondences and deeply evocative juxtapositions that result. I’m captivated by this experiment because, for once, it pulls The Shining away from Kubrick’s intentionality into a larger realm of accident, chance and poetry that radiates outward into the world from the sealed inner space of a game.

What is a “theory”? One could say: a theory is an account of how something works. Every field of study has its theories. For example, three important theories in physics are Newton’s gravitational law, relativity, and the “Big Bang”. This is the sense in which we are using the word when we discuss Room 237.

But there is another sense in which the word has been used in the humanities in the last few decades: let’s call it capital-T “Theory,” a large umbrella that includes feminism, Marxism, psychoanalysis, structuralism, post-structrualism, queer theory, post-colonialism, and more. “Theory” in this sense is a kind of speculative thinking that is broad-ranging (meaning: its effects have been felt across multiple disciplines) and, crucially, it is a political and critical activity. “Theory” in this sense is motivated by an impulse to question “common sense” and “the natural,” note inequalities and injustices, unmask relations of power, show how ideology works — basically, to critique our world in some way.

The philosopher Richard Rorty traces the origins of this activity back to the mid-19th century (I’m quoting from Jonathan Culler’s book Literary Theory):

Beginning in the days of Goethe and Macaulay and Carlyle and Emerson, a new kind of writing has developed which is neither the evaluation of relative merits of literary productions, nor intellectual history, nor moral philosophy, nor social prophecy, but all of these mingled together in a new genre.

In Room 237, we have several “theories” to account for the film but what I miss is any whiff of “Theory,” in however casual or informal or un-academic a form.

— I was honored to be asked to join the editorial advisory board of REFRAME, edited by the indefatigable Catherine Grant. At the blog for REFRAME, Catherine has launched a new feature, a “weekly roundup of international news and links in media, film and music research.”  At Film Studies for Free, she rounds up the new issue of Jump Cut and pays tribute to recently deceased filmmaker Octavio Getino, who helped create both the theory and the practice of “Third Cinema”. Also, via Catherine: Pedro Almodóvar on the Spain protests.

— A 1971 interview with Jean Eustache translated by Ted Fendt at  MUBI.

— In a few weeks I’m driving down to the University of Pittsburgh to attend the Cinephilia/Cinephobia conference.

— New issues of La Furia Umana and Desistfilm; the latter includes a page that collects Top 50 lists from the members of the editorial board.

— Recent additions at Hulu+ include (all in HD): Rossellini’s India: Matri Bhumi, Stromboli, L’Amore and Voyage to Italy; Oshima’s Boy; Ozu’s The Flavor of Green Tea over Rice, Brothers and Sisters of the Toda Family and Walk Cheerfully; and Rivette’s Le Coup du Berger.

— Why is it that films, more than other art-forms like literature, need explicit patterning, repetition of action, and restatement? See David Bordwell’s interesting post, which calls upon Hong Sang-soo’s In Another Country. Also: David on the long take.

— Adrian Martin on images of “hand-holding” in movies: “The recent explosion of Internet-based film analyses — using screenshots, short clips, audio samples, gifs, image-collages, and much else — has been training us to notice what, once upon a time, we might never have noticed in movies.” Also: Adrian on the best Australian film of 2012.

— Eric Rentschler at Artforum on the 50th anniversary of the Oberhausen Manifesto.

— This recently held conference on the films of Werner Schroeter at Boston University has me looking me forward to the retrospective of his films in Toronto next month.

— Several tributes to the late Tom Milne are collected here.

— Mark Rappaport on “the double life of Paul Henreid”.

— Cinema Guild is releasing three good Sokurov films: Whispering Pages, Stone, and Save and Protect. Also, their Twitter page hints that the work of British artist/filmmaker Ben Rivers may finally be appearing on DVD. Here’s a Dennis Lim article on Rivers in the NYT.

— The AV Club has released its list of top 50 films of the ’90s. The dominance of English-language films on this list is appalling.