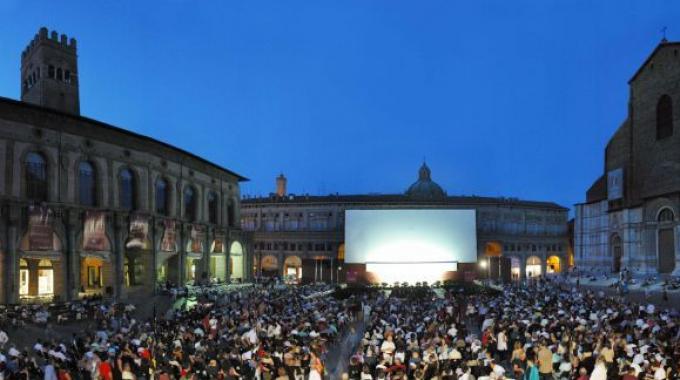 My first visit to Il Cinema Ritrovato in Bologna turned to be a total film festival experience, more so than any other I’ve experienced. I travel annually to Toronto’s TIFF, and have attended festivals in cities like Rotterdam and Montreal but never before was I so strongly engaged with exploring the city itself, its streets and architecture, its restaurants, and witnessing its cultural life. In a nice scheduling touch, there were no screenings for a two-hour period during lunchtime, which permitted a leisurely meal with wine every day. And each night brought a public and festive piazza screening that was attended by hundreds — the series included Lola, The Grand Illusion, Point Blank, Lawrence of Arabia, and Chaplin, among others.

So, a half-dozen festival highlights:

(1) Sonnenstrahl (“Ray of Sunshine”, Pál Fejös, 1933). The only other film I’ve seen by the Hungarian Fejös is Lonesome (1927), made in Hollywood, an absolute stunner, with one of my favorite opening sequences in all of cinema. (Criterion is releasing it soon.) Sonnenstrahl, which he made in Austria, showed as part of a terrific program called “After the Crash: Cinema and the 1929 Crisis,” curated by festival artistic director Peter von Bagh. It’s a film about two young people, desperately poor, who meet on a bridge as they are about to commit suicide. We follow their struggle out of precarious straits and into a tenuous working-class existence. The film sets out to capture their small victories and little joys, even if abjection and disaster are often around the corner.

(2) Maldone (Jean Grémillon, 1927). The title character is a bargeman who inherits an estate, leaves the gypsy woman he is wooing, marries out of duty, and finds himself nearly driven mad by his bourgeois life. It’s a thrillingly inventive film, deeply marked by its French impressionist moment, that puts an arsenal of effects to work: startling compositions and changes in shot scale, free cutting, expressive camera movement (including hand-held), unexpected super-impositions, and so on. Grémillon achieves a musical dynamism by modulating between passages of contrasting rhythm. Hubert Niogret of Positif corroborates the existence of this musical quality: “Grémillon began his career by playing background piano for silent films, and he himself composed the music for his later films, all documentaries.” David Cairns also observes: “…surprising how many classic French films take to the waterways: L’Atalante, of course, and also Gance’s La Roue. (Britain offers The Bargee and Young Adam. America doesn’t do canals.)”

(3) Man’s Castle (Frank Borzage, 1933). Hervé Dumont, former head of the Swiss Film Archive and author of the most sizable study of Borzage’s films, was at hand to give a lengthy and useful introduction. He characterized the two leads, played by Spencer Tracy and Loretta Young, as “aristocrats of the soul.” The film is about two dirt-poor lovers who live in a shanty-town sardonically named “Hooverville”. For Borzage, they are a world apart from everyone else, and not always for the better. The man is bitter, charismatic, self-loathing, cruel and (way down) hyper-sensitive; the woman is impossibly generous, un-possessive, beatific and resigned. This is a powerfully poetic, moving, and disturbing film that haunts me still. (See also: Joe McElhaney’s brilliant overview essay on Borzage’s films.)

(4) Le ciel est à vous (Jean Grémillon, 1944). An “aviatrix film” with a rich set of characters and an utterly convincing ‘realism’ of human interactions. It’s a work brimming with grace notes and casually suspended sub-plots. (One of them concerns the aviatrix’s daughter and her secret passion for piano and music study.) The film’s protagonist is played by French actress Madeleine Renaud, one of my great revelations in Bologna. Jonathan Rosenbaum writes: “Part of what’s so remarkable about her four Grémillon roles is their range and their capacity to undermine patriarchal stereotypes: she plays an apparently meek housewife turned potential adulterer in L’étrange Monsieur Victor (opposite the extraordinary Raimu in the title part), a neglected “older woman” juxtaposed with a younger female star in Remorques and Lumière d’été (familiar parts to which she gives relatively fresh spins), and, most surprising, a hardworking housewife and mother turned aviatrix heroine in Le ciel est à vous.”

(5) Nieuwe Gronden (“New Earth”, Joris Ivens, 1933). A potent documentary, just 30 minutes long, and ingeniously bifurcated. The first half narrates the unbelievably heroic account of 10,000 Dutch workers laboring to reclaim fertile land from the sea, a project that was begun in the early 1920s and took 10 years. The conclusion of the project could not have been more timely: the Depression was just setting in. But then the grain market collapsed and the second half reveals how wheat, instead of being harvested and used to feed hungry millions around the world, was dumped, burned, thrown into the sea, to elevate grain prices. The film raises you high with a tale of human super-achievement and then slams you down with a brutal dose of capitalist reality. (It’s available on this superb, 5-DVD, 20-film Joris Ivens box set that I picked up last year.)

(6) Me and My Gal (Raoul Walsh, 1933). This wonderful, energetic, and inventive comedy with Spencer Tracy and Joan Bennett also showed as part of the Manny Farber tribute series curated by the Film Society of Lincoln Center a few years back. Farber wrote eloquently of the film: “It is really a portrait of a neighborhood, the feeling of human bonds in a guileless community, a lyrical approximation of Lower East Side and its uneducated, spirited stevedore-clerk-shopkeeper cast. There is psychological rightness in the scale relationships of actors to locale, and this, coupled with liberated acting, make an exhilarating poetry about a brash-cocky-exuberant provincial. Walsh, in this lunatically original, festive dance, is nothing less than a poet of the American immigrant.”

Any thoughts or comments on these filmmakers or on film festivals in general? Please feel free to share.

— Other reports from Bologna: Larry Gross at Film Comment; Kristin Thompson at her blog (see the bottom of her page for links to Meredith Brody’s coverage at IndieWire); and Ehsan Khoshbakht at MUBI. Also: the Belgian website Photogénie, that I mentioned in my previous post.

— Andy Rector posts the translation of an interview with António Reis conducted by Serge Daney and Jean-Pierre Oudart in 1977.

— Kent Jones and B. Kite exchange letters on Bresson.

— News from my hometown: the silent origins of Tamil cinema. (via The Bioscope)

— Paul Ramaeker at The Third Meaning: “Mad Love: The Surrealism of the Supernatural Romantic Melodrama, Part One”.

— Issue 1 of the journal Screen Machine focuses “on realism”.

— Jean-Claude Carrière: “Godard doesn’t like a script. He likes to talk a lot but also to have some pieces of dialogue in his pocket just in case. Buñuel liked everything to be in the script except the technical. The word ‘camera’ was prohibited. That was his work.”

For Film Quarterly Quorum: on the cinema of futurity at IDFA (International Film Festival Amsterdam).

END_OF_DOCUMENT_TOKEN_TO_BE_REPLACED

Indigenous Cinema and the Limits of Auteurism

For Criterion: Why auteurism may not be the best way to appreciate Indigenous cinema.