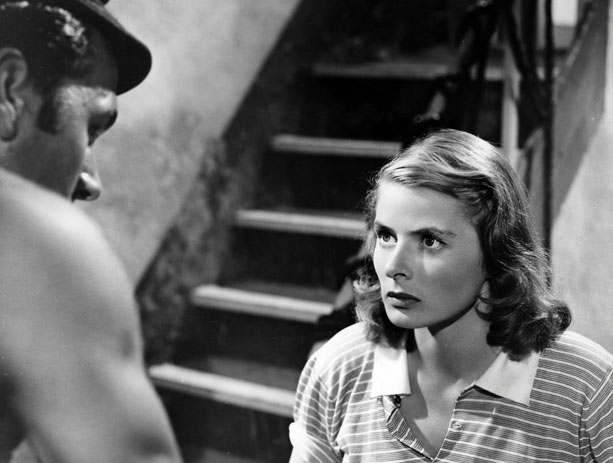 I’m curious to hear about your experiences with films that you weren’t ready for when you first encountered them–films that required considerable effort before you could understand and love them. Nicole Brenez calls these Strombolian films; for her, Roberto Rossellini’s Stromboli (1949) was such a work. She writes in Movie Mutations: “These are films that resist, that one must surmount just as Ingrid Bergman scaled her volcano, and that change you forever…”

Wong Kar-wai’s Chungking Express (1994) was, for me, a key Strombolian film. The first time I watched it, I remember this: I reached for a pillow and hurled it at the screen! It was at the very moment that Faye Wong put on the Mamas and the Papas’ “California Dreamin'” for the umpteenth time. The film seemed to be caught in an infinite loop, uninterested in moving forward. At the time I had been discovering the pleasures of character-driven cinema–like Howard Hawks and Eric Rohmer–and in comparison, Wong’s film seemed to care not a whit about ‘advancing’ plot or character. The reigning mood was one of stasis.

A few years later, when I revisited the film, I was led to an important self-realization: that I had privileged and held as ‘natural’ a certain economy between form and content in a film work. According to this economy, matters of form and style–composition, cutting, rhythm, color, texture, movement, mood–had a specific function. They served something ‘higher’: narrative and character. Of course, this classicist criterion for judging an artwork seems embarrassingly restrictive to me today–but there was a time when I applied its yardstick to every film that came along. In fact, I suspect that such an economy between form and content is widely held as the norm by the viewing public at large today.

The content of Chungking Express might be about stasis, but its form–I realized upon second viewing–is all about movement! The film burns with stylistic bravura, most remarkably Wong’s signature stretch printing of action which smears colors and shapes voluptuously across the screen. The French critic Jean-Marc Lalanne has written:

In cutting and recomposition through editing each movement of the actors, the mise-en-scène invents a kind of ‘ballet mécanique’ of human movements, a choreography in which each gesture becomes abstract, loses its functionality in favor of a purely musical value.

Brenez’s notion of Strombolian films holds at least three lessons: (1) A viewing experience is often contingent upon where we happen to be situated–in our lives at a certain point in time–in relation to a work and its aesthetic; (2) It is important to revisit films that frustrated or disappointed us the first time around, and do so with a willingness–even eagerness–to struggle with the work while we simultaneously de-emphasize evaluative judgment for a little while; and (3) The resistance we encounter from an artwork can be put to great and productive use.

I’m wondering: What are your experiences of films that you weren’t ready for when you first encountered them? Please feel free to share.