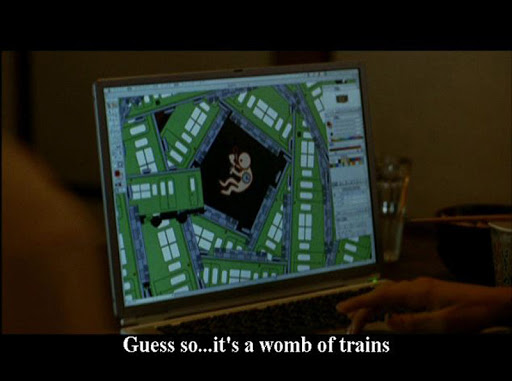 I’ve had a couple of different trains of thought running through my head lately; let me draw them together in this post under the broad, common theme of auteurism.

The subject of Adrian’s new column at Filmkrant is the screenwriter/auteur debate. He recounts an exchange between Josh Olson and Brad Stevens. Olson wants to remind everyone that even though Cronenberg might get the credit for the two much-talked-about sex scenes in A History of Violence, he (Olson) is the one who scripted them word by word. Adrian writes:

Stevens fires back with an impeccable cinephilic example. The opening scene of Hou Hsiao-hsien’s Café Lumière (2003) is so rich and complex on the level of its sounds and images, gestures and spaces, light-values and rhythms, that it could never have been entirely ‘foreseen’ or described in a script. Stevens does not mention Hou’s close longtime script collaborator, celebrated Taiwanese novelist Chu Tien-wen, but his point is solid. However, it sends Olson and his LA-based comrades into apoplectic fits: it’s a critic’s fantasy! Auteurist nonsense that can only believed by eggheads who have never made a film! Give the greatest directors in the world a blank page, and see if they are so great then!

As Steven Maras argues in his forthcoming Wallflower Press book on screenwriting, this rage rests on the metaphor-idea that, while the writer is the true creator, and the script functions as an architectural blueprint, the director is merely the person who ‘executes’ the script, or builds the house to prior specifications. What auteurism – in its most enlightened form – is about is not the god-like primacy of the director on set, but the ‘holistic’, integrated, organic conception of a film, from first idea to final post-production. Hou guides this process from the start; while Cronenberg imposes his vision on projects that he does not always initiate. But cinema is the weaving of many different ‘writings’, from the written to the filmic – not the primacy of any one over all the others.

The above piece sparked an interesting discussion in the comments to the previous post (scroll down about three-quarters of the way). I thought we might continue and extend it, either here or in the previous thread. Let me offer a few remarks in response to that discussion.

In my view, auteurism is not an account of how films are made. It is instead one among many ways we, as viewers, choose to read a film. In other words, it is one particular lens through which films can be viewed: by foregrounding the ‘marks’ of expression belonging to one person, the auteur, most frequently the director.

The first widespread use of the term in France in the ’50s occurred in a very specific historical and political context. Cahiers du Cinema critics used their politique des auteurs to champion those filmmakers working in the Hollywood system who managed to imprint their signatures on films being made within a factory-like system of production. Thus, the CdC critics chose to read Hollywood films—and this was a political choice they were making—in a way that focused on the ‘identifying marks of expression’ made by an auteur like Nicholas Ray or Alfred Hitchcock or Howard Hawks.

Since then, the term ‘auteur’ has found use in a looser, broader fashion, but I don’t see it as objectively claiming (as a ‘theory’ might) that the contributions of the director trump those of the screenwriter, the stars, the cinematographer, etc. In fact, the term ‘auteur theory’—first used by Andrew Sarris when the politique made its trans-Atlantic crossing in the early ’60s—is misleading since auteurism is not a theory at all, but instead a certain mode and manner of reading films.

Dana Polan has a fascinating essay called “Auteur Desire” which was published at Screening the Past in 2001. He explains the double meaning of the essay’s title:

On the one hand, in auteur theory, there is a drive to outline the desire of the director, his or her (but usually his) recourse to filmmaking as a way to express personal vision. The concern in auteur studies to pinpoint the primary obsessions and thematic preoccupations of this or that creator is thus an attempt to outline the director’s desire. On the other hand, there is also desire for the director – the obsession of the cinephile or the film scholar to understand films as having an originary instance in the person who signs them. Here, it is important to look less at what the director wants than what the analyzing auteurist wants – namely, to classify and give distinction to films according to their directors and to master their corpuses. […]

[There is a] belief in conventional auteurism that it is precisely because the pressures of the system so weigh down on the auteur that he/she (but usually he in the canons of such criticism) is forced to creativity as a veritable survival tactic.

Polan makes a distinction between ‘classic’, Cahiers/Sarris auteurism and contemporary auteurism. The former was frequently mystificatory, believing that “personal artistic expression emerged in mysterious ways from ineffable deep wells of creativity,” while the latter involves closer attention to the encounter between the auteur and the resources of filmmaking, and

a greater concreteness and detail in the examination of just what the work of the director involves. Gunning, for example, is explicit in his understanding of Lang not as a romantic genius drawing inspiration intuitively from hidden depths of insight but as a veritable pragmatist who directly labors on the materials of the world.

Likewise, the historical poetics of David Bordwell focuses attention on the immediate craft of the filmmaker – how he/she works in precise material ways with the tools and materials of his/her trade.

There are precursors to these contemporary approaches: for example, the mise-en-scène criticism of Movie magazine and V.F. Perkins, and Manny Farber’s close attention to the myriad ‘surface’ details of a film—what Polan calls “an auteurism of energetics rather than metaphysics or thematics.”

He also proposes this interesting idea:

[I]t might not be too extreme to suggest that in the auteur theory, the real auteurs turn out to be the auteurists rather than the directors they study. Faced with the vast anonymity and ordinariness of the mass of films that have ever been made – and in contrast to the anonymous, ordinary manner in which many people see films (the LA times reports that many average spectators go to the multiplex not having a specific film title in mind and choose once they confront the array of offerings) – the auteurist quests to have his personal vision of cinema emerge from obscurity. He struggles to impose his vision on a system of indifference…

This brings me to a notion that I have long wondered about: why is it that seasoned, intelligent auteurists don’t always agree on the value of a particular film or filmmaker? In the light of “auteur desire,” the answer is not difficult to see. If each auteurist brings to and imposes his/her desire upon a film or filmmaker, and no two people share the exact same configuration of desires (assuming that the desires of a person are influenced by his/her ‘subjectivity’, which is historically shaped by the accumulated set of cultural experiences that person, or ‘subject’, has had), each person would, naturally, have a different and unique encounter with a particular artwork. This makes disagreements both a matter of course and perfectly understandable.

Dan Sallitt, in a thread from the a_film_by archives, offers interesting insights on disagreements about the value of artworks:

When we disagree about the value of an artist or a work of art, we wonder how intelligent observers can be so far apart, not only in their opinions, but also in their perceptions. One possible model for disagreement is that one person has a wiser perspective on the topic at hand, and that the other person simply has grabbed hold of the wrong end of it. In most cases, this model is deeply inadequate from any objective perspective: it doesn’t account at all for the great coherence and thoughtfulness that we often see on both sides, even when the positions are plainly mutually exclusive. But, in our hearts of hearts, this is the theory that we usually hold when we are one of the parties to the disagreement: our own position seems so coherent that we suspect the wisdom or the motives of the other party. Once in a while life presents us with an example of a disagreement where one side is clearly better supported than the other, and these occasional instances give us hope that maybe all of our opponents are similarly misled.

What occurred to me this morning is that maybe we underestimate: a) the incredible amount of data available in even the simplest work of art; and b) the mind’s ability to find strong, coherent patterns in even a small collection of data. So, for instance, I come to Kubrick with a particular heightened aversion to a certain acting style which is connected to a certain personality trait. I identify this element, am ticked off by it, and calibrate my perceptive apparatus so that I start picking up any other element with some aspect in common. Because there is so much data in a movie, I have no trouble finding lots of support for my initial aversion, and in discarding the occasional data point that doesn’t fit what I’m looking for. Within minutes, voila! I have constructed a coherent Kubrick-pattern that I call a sensibility. Meanwhile, other observers, without the same baseline aversion that I have, not only construct a different Kubrick-pattern, but also lack a slot in their Kubrick-pattern to help them identify the traits that look obvious to me.