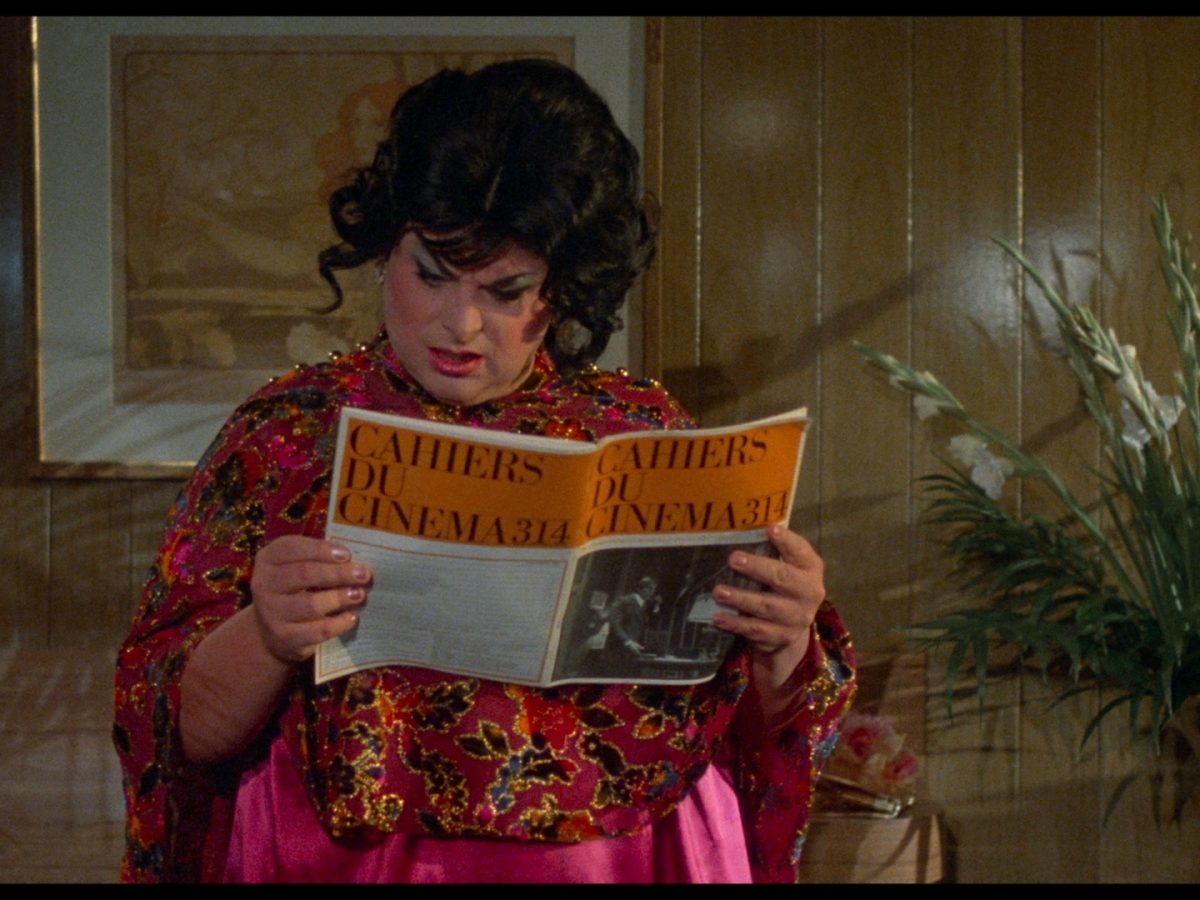 There’s a terrific essay by Emilie Bickerton on Cahiers du Cinema—the best-known film magazine in the world—in a recent issue of the New Left Review. At 30 pages, it’s a lengthy and informative piece, and is readable on-line, but for a steep fee. So I thought I’d try to summarize it here and include a few brief passages I found especially interesting. I’m often paraphrasing Bickerton below, and all unattributed quotations refer to her words.

A few basic facts. Co-founded by Andre Bazin, Cahiers du Cinema first appeared in 1951. Quickly, it began featuring several writers who would, a few years later, be responsible for the birth of the French New Wave: François Truffaut, Jean-Luc Godard, Claude Chabrol, Jacques Rivette and Eric Rohmer. (A piece of trivia I never knew: Maurice Scherer changed his name to Eric Rohmer as an homage to Erich von Stroheim and Sax Rohmer, the creator of Fu Manchu.) From the beginning, these writers were (1) all united by an ardent, passionate cinephilia; and (2) intent on taking aim at the kind of polished and ‘respectable’ French cinema that was in favor at the time (“the Tradition of Quality”).

The 1950’s. For years, every issue of the magazine sported a yellow cover with a single black-and-white still from the film most admired in the issue. Typically, the writer who was most enthusiastic about a film would be assigned the task of writing about it. The manifesto in the first issue decried “the malevolent neutralism that would tolerate a mediocre cinema, a prudential criticism and a stupefied public”; films championed in that issue included Bresson’s Diary of a Country Priest, Billy Wilder’s Sunset Boulevard, Vittorio De Sica’s Miracle in Milan and Edward Dmytryk’s Give Us This Day.

The appearance, like a gunshot, of Truffaut’s famous and notorious article “A Certain Tendency in French Cinema” (1954) coalesced the polemical charge of the magazine:

“[That essay] formulated the politique des auteurs into an axiomatic programme. Unlike a mere director, an auteur was a film-maker with a vision of the world that was made manifest through his mise-en-scène: it was not the particular subject but the way the author chose to treat it that was important; in the hands of a master, the flimsiest detective story could become a great work. Viewing therefore involved not a concentration on the content but on this cinematic staging, which was where the auteur’s ‘griffe’, or mark, could be grasped. Even—perhaps especially—the worst films of an auteur were to be appreciated in this fashion, in contrast to an oeuvre-by-oeuvre analysis. As Doniol-Valcroze would later put it, with Truffaut’s article, ‘something bound us together. From then on it was known that we were for Renoir, Rossellini, Hitchcock . . . and against X, Y and Z.’”

The Cahiers writers of this period are occasionally misunderstood as being monolithically united with a common, homogeneous sensibility. In fact, they were a markedly diverse bunch:

“Early contributions on Nicholas Ray bring out the distinctiveness of each critic. Rivette addressed his readers with a set of elegant imperatives: this must be loved, that must be recognized—a style of criticism always conscious of the spectator he had to convince. For Godard, with characteristically infectious grandeur, ‘Bitter Victory, like the sun, makes you close your eyes. Truth is blinding.’ Truffaut was aggressive, prescriptive and darkly comical […] Rohmer was always more sober, though no less enraptured. ‘May I be forgiven my vice’, he asked readers, ‘of evoking the memory of the ancient Greeks’ to read Rebel Without A Cause as a ‘drama in five acts’. The contrast was instructive: Godard and Rivette celebrated the unprecedented in Ray; Rohmer drew out the timeless issues of morality and tragedy.”

Cahiers was not without its blind spots. It largely bypassed Third World and avant-garde cinemas for a long time; and often paid scant attention to animation, fantasy and comedies. More importantly, it was relatively apolitical, ignoring both Indo-China and the Algerian war. This was in contrast to Positif, its frequent rival, which was openly political, anti-colonial, and surrealist-influenced. Positif was founded in 1952, a year after Cahiers, and in comparison, featured less Hollywood and more Latin American and Third World cinema, and was also less auteur– and more genre-sympathetic than Cahiers.

The 1960’s. Just 40 years old, Bazin died from cancer in 1958. Rohmer succeeded him as editor. An internal revolt led by Rivette a few years later aimed to move the journal in a new direction, freeing it from its pure devotion to cinephilia, or at least connecting it to wider intellectual trends and movements. The clash came to a head over one particular issue (# 144) which both opposing factions worked on; Rohmer’s was the one that got published. But it was his last as editor; Rivette took over with the next issue, in 1963, and called for a more serious consideration of the social context of cinema. He said:

“Such are the perils of the ‘pure gaze’ attitude that leads one to complete submission before a film . . . like cows in a field transfixed by the sight of trains passing by, but with little hope of ever understanding what makes them move.”

Under Rivette and following him, Cahiers opened itself up to the broad intellectual currents of its time: anthropology (Lévi-Strauss); literary theory (Barthes); psychoanalysis (Lacan); ideology (Althusser), and structuralism. Among the most influential writers at Cahiers over the next several years were two former medical students from Algeria, Jean-Louis Comolli and Jean Narboni. Design changes announced the new track of the journal; the famous yellow (perhaps now a symbol of golden-ageism) was replaced by a different color each month. The new editorial team became more diverse and inter-disciplinary. Rivette left the editorship in 1965 to make The Nun; Comolli and Narboni took over.

The 1970’s. A time of serious political events: the struggles in Vietnam and Indo-China, the Cultural Revolution in China, and the events of May 1968. The direction at Cahiers shifted from structuralist preoccupations to a vocal political militancy.

“As a cinema magazine, ‘operating in a situation in which the majority of films are produced within the capitalist system and its dominant ideology’, the first question was to ask which films served simply to transmit that ideology and which attempted to intercept it, to reveal its mechanisms. They discerned seven categories altogether. The first and largest, whether ‘commercial’ or ‘art-house’, ‘modern’ or ‘traditional’, was of films ‘imbued through and through with with the dominant ideology’, and gave no indication that their makers were even aware of the fact. In form, they ‘totally accept the established system of depicting reality: “bourgeois realism” . . . Nothing in these films jars against the ideology’. A second category—Straub’s Not Reconciled and Rocha’s Terra em Transe were cited—directly challenged the ideological system both through form and subject matter; or category three, did so indirectly (Bergman’s Persona). Fourth, with Costa-Gavras singled out for criticism, were apparently political films that were in fact unremittingly ideological. Fifth, apparently ideological films (Ford, Dreyer, Rossellini) which in fact reveal the ideology to be cracking under its internal tensions. Good (formally reflective) and bad (pseudo-realist) forms of grass-roots cinema direct made up categories six and seven.”

This was a time of dense Cahiers texts, often with a strong Lacanian-Althusserian influence. Essays—famous examples include those on Young Mr. Lincoln and Morocco—were longer and thicker than ever before. The influence spread to Britain: Screen was formed using Cahiers as a model. A strong turn toward Maoism followed, and for that and other reasons, several long-time writers left the magazine (Truffaut, Doniol-Valcroze, Kast, Eisenschitz, Sylvie Pierre). Publication and sales sank to an all-time low.

Serge Daney and Serge Toubiana took over the reins in 1974. A reorientation followed, Daney advocating a heterogeneity and producing several key texts during the next few years. Without abandoning its political commitment, Cahiers attempted to get back in touch with its cinephilic roots while maintaining connections to the intellectual culture of the time. (Foucault, Deleuze, and Rancière all appeared in the magazine during this time.) However, a slow move toward the mainstream began in the late 70’s as a response to large-scale corporatization of the media which, Cahiers decided, needed to be addressed and taken up seriously in the magazine.

The 1980’s to the present. Hollywood films (E.T., Apocalypse Now, The Shining) now began to get wide coverage as Cahiers moved toward populism, consciously seeking to expand its reader base. Design changes introduced full-color and more white space for easy readability. Daney had quit by this time (“Toubiana has a very precise idea of what he wants to do with the journal: to relocate it at the cinematic centre. My idea is less clearly defined, more vagabond—but his has a future.”) The Le Monde group purchased Cahiers in the late 90’s.

“Cinema has already entered its second century. Yet in order to flourish, it requires a broader critical culture around it, arguing, pushing, demanding more. The pockets of interest—an experimental initiative here, innovative festival there—all too often occur in isolation. Without a responsive audience around it, any film can exist only in the temporality of its own screening. What sustained Cahiers was its use of writing (with pen and camera) and later theory, as the means to grasp the unarticulated potentials and achievements of film. These tools remain essential for film criticism today. Recalling Bazin, Daney wrote, ‘Cinephilia was not just a relation to cinema, it was a relation to the world through cinema.’”

[…] “Cahiers still appears each month, now in a glossy magazine format indistinguishable from the ruck of mainstream cinema guides. Festival films, commercial offerings, educational angles, archives: the well-intentioned coverage is wider than ever, the style mannered, if curiously affectless; the overall effect—so much to choose from, so little at stake—has the mind-numbing quality of an upmarket consumer report. For thirty years, the journal’s interventions had helped shape the way cinema has been understood and experienced, popularly and theoretically. Cahiers both engaged and provoked film-makers into action, making it for a long time, to paraphrase Alexandre Astruc, the real stylo-caméra. Today it would seem little more stimulating than the inflight magazine on the plane to the next film festival. How did it come to this?”

Your take on Bickerton’s account of Cahiers du Cinema? And/or any Cahiers-related reflections you may have? Your thoughts are most welcome. [Time flies: this is post #250 at the blog…]