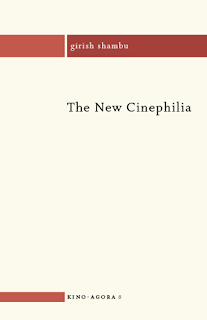 I’m happy to announce that my book, The New Cinephilia, is now out. It is part of caboose’s Kino-Agora series, edited by Christian Keathley.

It can be ordered from caboose for $5, and from Amazon for slightly more. It is also available as a Kindle e-book from Amazon, although, given the lovely production design, I would recommend the print version over the e-version.

As is obvious from the prices above, caboose — responsible for the recent, acclaimed translations of André Bazin’s What is Cinema? and Jean-Luc Godard’s Introduction to a True History of Cinema and Television — is less a “business” than a pure labor of love for cinema.

The publisher is running a special offer for the next week: with each online purchase of the Godard volume, it is giving away four free titles from its Kino-Agora series, including three new releases in the series: Jacques Aumont’s Montage, Timothy Barnard’s Découpage and Frank Kessler’s Mise en scène. Please see the Godard order page for details.

Thank you for reading!

— David Hudson has posted the list of award-winners at the 2015 Cannes film festival.

Cannes Top 10. Very little separating the top 3, which towered over everything else.

— Blake Williams‘ rank-ordered list of the 50 or so films he caught at Cannes. And Ignatiy Vishnevetsky filed several reports from the festival.

— Catherine Grant rounds up the last two issues of [in]Transition.

— Jonathan Rosenbaum, in a post on Pedro Costa’s Ne Change Rien: “Any film that’s about listening, as this one will be [referring to a documentary film Jonathan once planned to make about jazz pianist McCoy Tyner], will also be about looking — predicated on the philosophy that the way one looks at musicians already helps to determine the way one listens to them.”

— 85 films by women about women of color, crowd-sourced by Ava DuVernay on Twitter.

— I recently caught up with Elio Petri’s remarkable Investigation of a Citizen Under Suspicion (1971). Here is a good essay by Evan Calder Williams on the film.

— An old piece on David Lynch by Nathan Lee at Bookforum that I had missed: “Body Surface”. (Via Sam Ishii-Gonzales on Facebook.)

— A video of Vivian Sobchack’s lecture “Stop + Motion: On Animation, Inertia, and Innervation,” part of the Kracauer Lectures in Film and Media Theory in Frankfurt.

— The Challenge of Surrealism, an upcoming book that collects the correspondence between Theodor Adorno and Elisabeth Lenk. (Via Frederick Veith on Twitter.)

— A Tumblr page devoted to “all-male panels”. Submissions (photos and screenshots) are invited. Also: examples of all-male bibliography in an academic work.

— The new issue of the journal Postmodern Culture is online.